Cyclo-cross National Series Round One Results 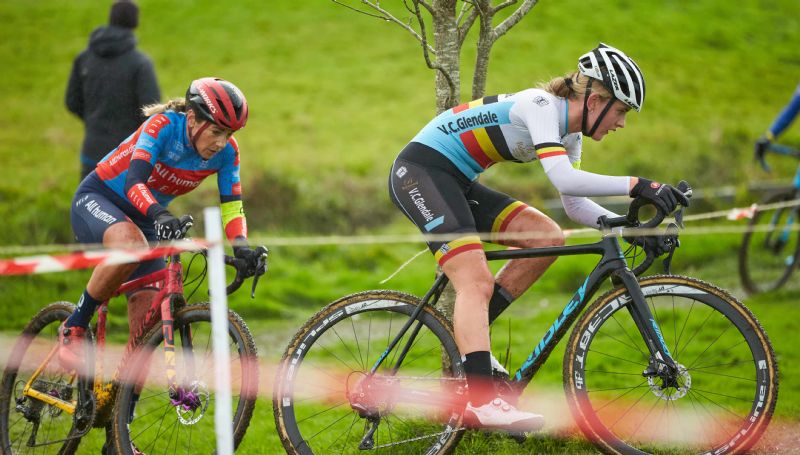 Aine Doherty in action in the Women's race (Credit: AtomCreates)

Dean Harvey and Aine Doherty were the winners of the feature races in the first round of the inaugural Cyclo-cross National Series on Saturday, November 19th.

The first-ever Cycling Ireland National Series in the off-road discipline, fans were treated to an exciting day of racing across categories of all ages in Westport, Co Mayo.

And after a bright start to the morning, wet and windy conditions for much of the morning made for tough racing before the elements subsided somewhat in the afternoon.

The Spellman-Dublin Port rider and Darren Rafferty were neck and neck in a great battle for spectators in the opening two laps, but a mechanical issue in lap three meant Rafferty finished further down the field.

In the women’s race, junior rider Aine Doherty was the strongest as she finished 42 seconds clear of W40 rider Grace Young in second place, with Doherty pulling away after the pair fought for the lead in the opening three laps.

In the men’s junior race, Navan Road Club rider Joseph Mullen had 24 seconds to spare over second placed Trevor Harkniss. Tadhg Killeen was a further 35 seconds back to complete the podium.

In the Masters categories, Alan Bingham took the M40 win – with the race run alongside the senior men race – in a fine individual display alone out in front.

Inspired Cycling rider Jason Henry had 28 seconds to spare over Fearghal Regan in the M50 race, while Pierre Kinsella finished 27 seconds further back in third place.

David Lawless was too strong in the M60 race, finishing 1 minute and 25 seconds clear of Paul Birchall in second. 15 riders took part in a men’s ‘B’ race that saw Michael Davis take the win, 18 seconds ahead of Jakub Klapa.

There was also a full complement of youth races to start the day, with U8 all the way to U16 categories featured.

Attention now switches to Thurles and the second round of the series, which will take place on Saturday, November 26th.

You can also view our preview for Round Two here.