A muddy start to a weekend of National CX Championship 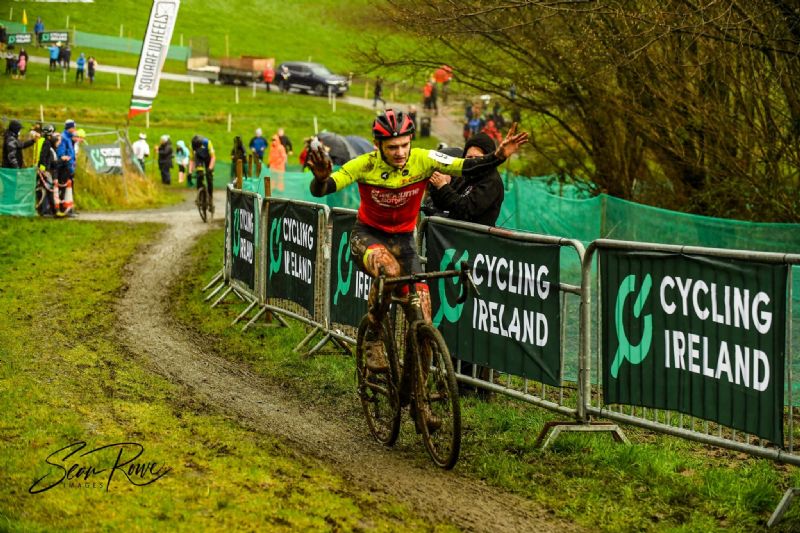 Saturday 8 January 2022 was the start of a weekend of National Cyclocross Championship racing at Palace Demense in Armagh. For host club, Square Wheels, this was their 5th year at this beautiful 300 acre venue and thanks have to go to Armagh, Banbridge and Craigavon Council for their continued support. Square Wheels were meant to host the event last year but Covid-19 restrictions had meant a cancellation to many events at that time. On Friday the course was covered in ice and snow. Setting up was challenging to the course builders. Overnight it went from 1 degree to 8 degrees. When the park opened on Saturday morning it looked like spring had arrived with hardly a trace of snow anywhere. The riders were greeted with banners, bunting and flags from Square Wheels and Cycling Ireland. Registration was within the courtyard where the cycling clubs/teams were able to set up their gazebos to create a village atmosphere. The race schedule had been adjusted to accommodate the weekly parkrun which started at 9:30 am. Thanks to all the volunteers from parkrun for being able to work around the cyclists arriving. The parkrun takes in two laps of a course which went around the outside of the cyclocross course.

The youth races, from Under 6s up to Under 12s, took place in a section of the gardens in front of the former bishop’s palace (built in 1770). This is a separate area away from the main race. Getting things underway were the Under 6s with 7 boys and 6 girls taking on 2 laps of their course. At the finish line they were awarded a goodie bag sponsored by Spar. There were goodie bags for all youth riders.

Lining up at a new start area were the Under 8s – 14 boys and 11 girls. They had 2 laps to complete which included a section up the challenging, muddy slope towards the back of the gardens. Taking the chequered flag, well clear of any rivals, was Benjamin Cunningham (Orwell Wheelers Cycling Club). Leo Gallagher (Shelbourne/Orchard CC) finished second with George Cleverley (Sliabh Luachra Cycling Club) third and host club’s Noah Mitchell taking fourth in the boys’ race. In the girls’ race it was Ruby Millar from the host club who took the win with another one from the host club, Ríonach Campbell getting second. Third place went to Sophia Campbell (Phoenix CC) with Fiadh Craig (VC Glendale) taking fourth.

The Under 10s then lined up – 21 boys and 9 girls. Their course took a different and more difficult line up the slope towards the back of the gardens. Crossing the finish line first, after 3 laps, was Daragh Quigley (Foyle CC). The boys’ podium was then filled with Jack McGahan (Square Wheels) and Ewan Ewart (Belfast City BMX Club) who finished second and third respectively. Aoife Campbell (Square Wheels) finished as first girl but up among the boys to finish third overall. Laoise Crinion (IMBRC) finished second with Grace Foley (Yeats Country Cycling Club) completing the girls’ podium.

The Under 12s race course was the longest and they had 4 laps to do. There was a great turnout for this race with 30 boys and 12 girls setting off on separate whistles from the start line. Josh McClune (Team Madigan C.C.) took a comfortable win in the boys’ race when he finished well ahead of Eoin Davis (Bohermeen CC). James Cunningham (Orwell Wheelers Cycling Club) was third with host club’s Eunan Campbell not far behind finishing fourth. Crossing the line 5th overall was the first placed girl Aoife Craig (VC Glendale). Orla Mulhearne (Panduit Carrick Wheelers) finished second with Naoise Byrne (Carlow RCC) taking the third place on the girls’ podium.

Racing then moved over to the main course. Lining up on the tarmac road were the Under 16 girls and the Under 14 girls. Both groups were taking on two laps of the full course. The course was very muddy towards the top end with very challenging muddy sections through the trees, off-camber corners, tricky descents, tight climbs where the riders were dismounting and running with their bikes, steps, then finally an uphill climb to the finish line. It also didn’t help the riders that it started raining while they were racing.

In the Under 16 girls’ race Aine Doherty (VC Glendale) took the win but had to work hard to keep off the advancing Aliyah Rafferty (Island Wheelers). Greta Lawless (Team WORC) finished third with Faith Robinson (Bray Wheelers) finishing fourth and picking up the first unplaced U15 prize. In the Under 14 girls’ race it was Emer Heverin (Kinning Cycles Cycling Club) who lead after lap one with Aisha Gannon (Breffni Wheelers) second but Aisha pulled away from Emer to finish well over a minute ahead of Emer. Ffion Dolan (Cuchulainn CC) finished third with Holly McCaffrey (Cuchulainn CC) fourth. Ciara O’Shea (Verge Sport PI Cycles) was awarded the first unplaced U13 prize.

The final race of the day was for the Under 14 boys and Under 16 boys. The Under 16 boys started first with the Under 14s starting after a one minute gap. Both groups had 3 laps to complete. Leading the Under 16 boys from start to finish was Samuel Coleman (Shelbourne/Orchard CC). There was a great battle for second place with Conor Murphy (Rostrevor Mountain Bike Club) taking that position, Joseph Mullen (Navan Road Club) finishing third, Seth Dunwoody (Shelbourne/Orchard CC) fourth and Ryan McCarthy (Verge Sport PI Cycles) fifth. Harry Hobbs (VC Glendale) finished sixth and took the U15 unplaced prize. The team prize for the Under 16 boys went to Shelbourne/Orchard CC when Daniel Scott crossed the line to join Samuel and Seth. In the Under 14 boys’ race, Curtis McKee (Scott Quanta Racing), sporting his new club’s kit, powered round the course to take the win and managed to finish not far behind the top 3 Under 16 boys. Second place in the Under 14 boys went to Hugh Og Mulhearne (Panduit Carrick Wheelers) with Rian McCrystal (Bellurgan Wheelers) coming from fifth on lap 1 to fourth on lap 2 to third at the finish. Caleb McGreevy (Apollo Cycling Team) finished fourth and picked up the first unplaced U13 prize.

The day finished with clear skies and a hint of sunshine. The muddy riders and spectators started making their way back to the car park to wash bikes and stuff muddy clothing into their vehicles. Thanks to all the volunteers from Square Wheels for hosting a great day. Action to return tomorrow for the Juniors, Seniors and Masters races.

Follow Independent.ie Sport and Cycling Ireland on social media for live coverage from 12:30pm of the senior women’s and men’s races. Regular Eurosport commentator Declan Quigley and Lara Gillespie will be on hand to call the action.