Team Racing Without Borders, Cycling Ireland's only virtual racing team and club is in the final preparations of building its team rosters to take on the most prestigious Virtual Racing League on the planet. The WTRL Zwift Racing League which starts on the 28th September with approximately 2,500 teams from every corner of the globe and timezone possible. This truly is the only league where you can race against the best virtually with the hope of gaining entry to the Premier League with the big guns. https://www.wtrl.racing/zwift-racing-league/ 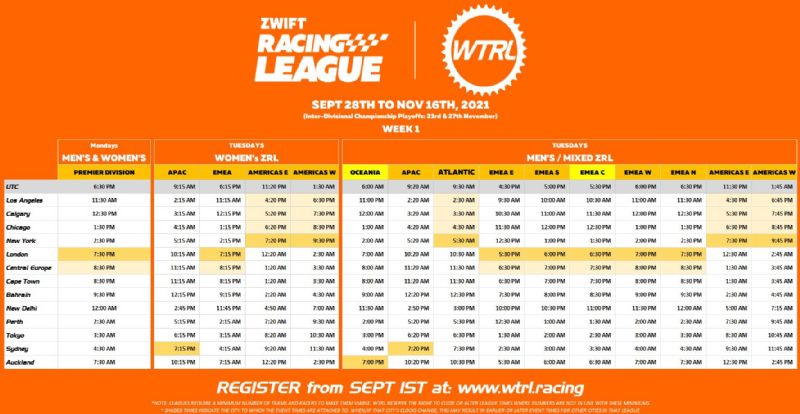 Last season, 2 Mixed Cat B teams won their League Divisions and one of the Mixed C teams the "Racing Without Borders Dragons" were narrowly beaten in the final sprint to be crowned World Champions after winning the C1 Division outright. The Ladies were smashing it too. A lot of these ladies have never raced before and really impressed in the first couple of seasons racing. Steadily climbing the ranks and league positions and divisions. A force to be reckoned with.
So far 12 mixed teams are being built and 5 womens only teams. There are teams from Cat D to Cat A+ so there's a team for everyone. If you are new to Zwift and want to race please get in touch and complete this form: https://forms.gle/Jm9Wx6iJx5U1fWFdA
Minimum Requirements to Race ZRL:
A smart trainer or power source (power pedals/cranks)
Heart rate monitor
Zwift Subscription
Registered on Zwift Power with at least a couple of races group rides recorded to gain a race Category
A FAN (most underrated piece of equipment for Zwifting)
Team Racing Without Borders have several Official Zwift Events running all year round, including Social Ride on a Monday evening at 7.30pm(GMT), Wednesday Workouts at 7pm(GMT), Friday Races at 7pm(GMT) and Sunday Endurance Rides (50-200km) at 8am(GMT).
Find all Team Racing Without Borders official Zwift Events at: https://www.zwift.com/uk/events/tag/racingwithoutborders
Check out their Facebook Page and our community group where you will receive all the help needed to get going:
www.facebook.com/RWBcycling - FB Page
www.facebook.com/groups/rwbireland - FB Community
www.facebook.com/groups/rwbladies - FB Ladies Only Community
Join their Zwift Power team at: https://zwiftpower.com/team.php?id=3369