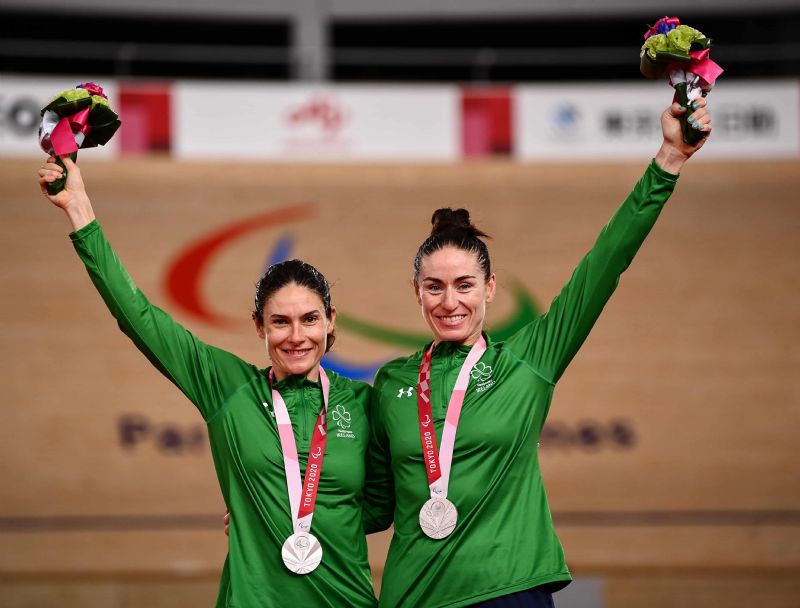 Katie George Dunlevy and Eve McCrystal took an emotional silver medal at the 3000m Individual Pursuit at the Paralympics.

En route to taking the medal they also set a World Record in what can only be described as a huge performance from the Irish crew.

The devastating pace set by Katie and Eve against the Polish team of Justyna Kiryla and Aleksandra Teclaw saw them burst across the line setting 3:19.946. Their average pace was 54.015km/hr.

This was racing on the edge, the speed told a story that this was going to be one of the biggest battles that Eve and Katie would have in their careers.

There was just 70 minutes between races – they went back into the bubble of the Irish area inside the infield.

Katie sent a comment to Cycling Ireland and said:

“Really happy with our ride. We left it all out on there and had nothing more to give.”

The British pair of Sophie Unwin and Jenny Holl took the bronze medal against the Belgians Hoet and Monsieur.

Next it was Katie and Eve’s appointment with history on the track. They clicked into their pedals and with a thumbs up from Eve they were off.

Bursting out of the start gate, the British team of Fachie and Hall set the race pace – going in advance of the Irish by the merest of split seconds.

By midway though Eve and Katie were back in the running, taking tenths of seconds off the British at every lap. But the short interval between races gave them a debt that they would have to pay and the British began again to overhaul them.

They are the margins, just metre centimetres but the Irish celebrated. Both being carried from their bikes by joyous team mates.

Afterwards, in an emotional interview, Eve and Kate dedicated their win to their families and to the people of Ireland and spoke about what it has taken to get them to the Izu Velodrome in the rolling hills of Shizuoka. 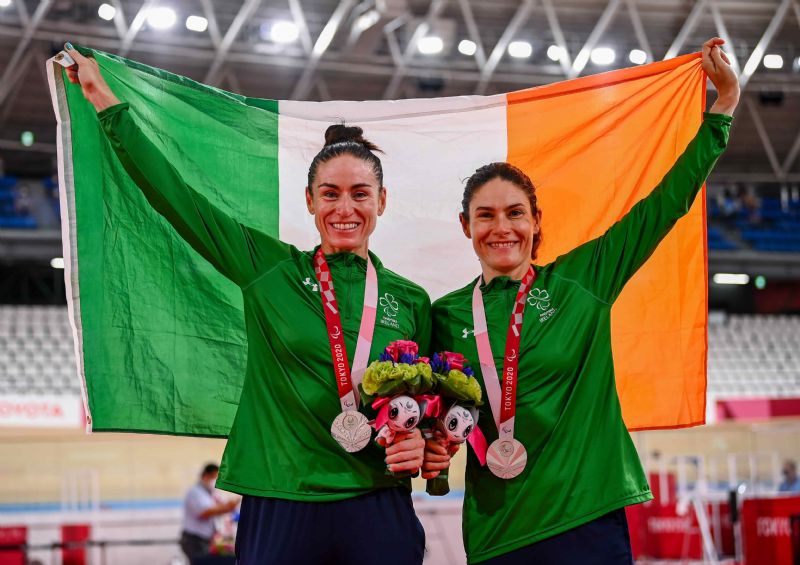 “I’m in a bit of shock, it is absolutely amazing. If someone said to me before that I would get a medal in the pursuit I would never have thought it in my wildest dreams. We were hoping to do a good ride and get a PB. To get that and a world record, I’m just speechless.”

Eve gathered her thoughts, and while fighting back the emotion, she said:

“I think we did ourselves proud, we left nothing to chance, no stone was left unturned by our coach Neill (Delahaye) and Cycling Ireland. He made sure that we would get her in best possible form. To get that performance, I just can’t believe it. I’m so proud of Katie and I know she is proud of me – I am just so happy that we did this.”

“It’s six days a week, it is hard work. Katie is at home, she can’t get out on the road, I‘m at home with the kids. There are constantly sacrifices that we make. It looks easy just to come here and do that performance there has been so much hard work behind the scenes for the two of us. We owe so much to so many people and this medal is for them as much as it is for us.

Katie spoke of the sacrifices made to make this medal dream a reality.

“Everyday, we’re working towards it, I’ve been away from home for six months now, that’s been quite hard. Last year I was away with Eve, fantastic last year, we’ve improved a lot. The sacrifices we make are seven days a week – you are trying to be the best you can be in your sport, to be the world’s best tandem pair. That’s what we are doing. When get a world record, for five minutes and get a medal, those sacrifices are worth it because we will have this for the rest of our lives,” she added.

The pair didn’t realise they set a world record until they came to a stop and were back in the Irish team area.

“This kind of a success might give the Government a kick to get that velodrome for our children. I just can't believe it. I’m mad that I didn’t look up at the board to see that world record. But we were in a whole world of hurt at that stage. We had it, okay someone else took it a few minutes later, but we had it. We also need to realise that we went 14 seconds faster here than we did in Rio. That is something – we got an 8 second PB too.”

Katie spoke about how she and Eve work their world beating relationship.

Eve also backed up her teammate in that view:

“We both know how much work we’ve done, we know the sacrifices we’ve made. We never veered off the road, doing the same work. It shows in our performance, we know what we did for here,” she said.

Next up is the Time Trial for Eve and Katie, who will compete on Tuesday, 31 August along with other category riders Richael Timothy, Martin Gordon, Eammon Byrne and Ronan Grimes.

Katie said the next plan is:

“We go and try recover, but this evening we go to Fuji. We love the road, we can’t wait to go there.”

“We have our medal but we want two more. We will be going to try and get another medal.”

Denis Toomey, Team Manager and Vice President of Paralympics Ireland, said that he and the other team Ireland backroom staff were over joyed with the success.

“I am just over the moon, well deserved by the athletes and Neill the coach. I keep saying it but they are achieving this without a velodrome, let's wake up and make it happen. There is a fabulous potential in Ireland for success in cycling, it makes everyone's efforts worthwhile. What they are achieving here is incredible. We have been very successful on the road, we are going into this with confidence. We can go in there and compete with our peers,” he said.