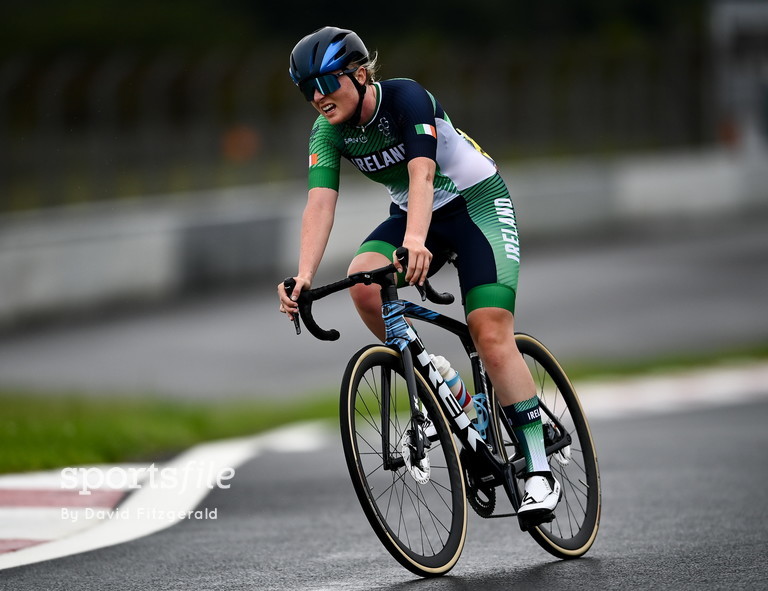 RICHAEL TIMOTHY has spoken of her joy having competed in her first Paralympics Game saying it has given her a sense of purpose.

Richael finished in eleventh in a hard-fought road race in pouring rain at the Fuji International Speedway on the last day of cycling competition at Tokyo 2020.

Such was the toughness of the event that the race had shattered into pieces early on as the weather conditions took hold.

The gold was taken by Keiko Sugiura of Japan, with Anna Beck of Sweden in silver and Paige Greco in bronze.

Richael battled on – the climbs sucking the power from her legs.

But afterwards she spoke to Cycling Ireland and said how delighted and honoured she was to have represented Ireland at the Paralympic Games in Japan.

“I didn’t really expect to be here at all, to be here was the goal and to give my all in each event. I can call myself a Paralympian now. Three years ago I was told to find something for myself to do – sport isn’t an option.

“But I kept pushing it that I wanted sport in my life that was how I found the paracycling and it gave me a purpose to get out and do something and now it is my livelihood.

“It has been absolutely brilliant and it is just mainly thanks to the people at home. My parents would love to be here but probably watching on TV especially in this weather,” she said.

The race was a war of attrition and won by the Japanese rider in a spectacular solo attack.

Richael’s view on it: “It was technical enough and obviously the hills don’t make it any easier. The plan was just to hang on as long as I could, especially with those stronger girls that I have been around.

“On the first lap everyone was taking it easier on the bends but then when it came to the hill it would split. After each lap you would get back on and then it would split again.

“It was very tough, but also good for me to get that little bit further staying in the group. That is the goal – especially with the lack of racing this year with the pandemic. I haven’t got the opportunity so every race I do now is about staying that bit longer as I get fitter,” she added.

The Roscommon woman is now focusing on the next step already and the Paris games in three years.

“Paris was my goal at the start, not really Tokyo. I’ll take a few weeks off and then I’ll go back at at – I want to get better.

“I did my best at these games, but I feel my best is better. I’ve learned so much from the girls. I have an amazing team who are clearly the best in the world at winning medals Just to continue to be surrounded by these people,” she added.