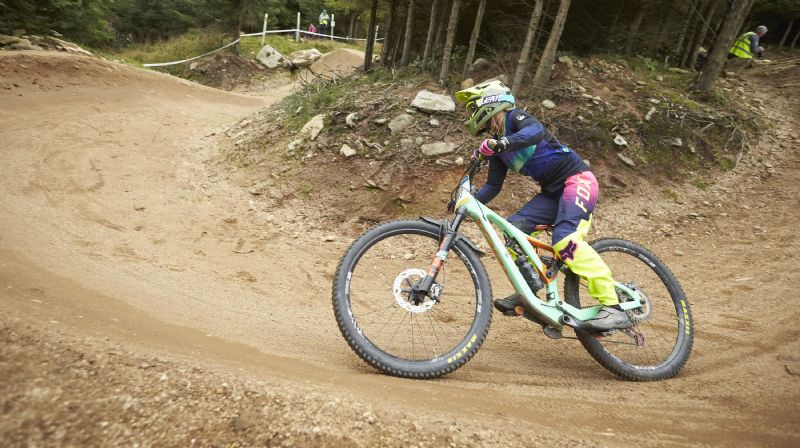 Cat Brady en-route to victory at Round 3 of the Downhill National Series (Credit: Atom Creates)

The third and final round of the 2022 Downhill National Series took place at The Glencullen Adventure Park (The GAP) on Sunday, 25th September 2022.

With this being the final race of the season, the overall standings of the 2022 Downhill National Series were confirmed at The GAP.

Matheus Neitzke was confirmed as the overall winner of the series, his 473 points tally saw him finish over 83 points ahead of second-placed Ronan Dunne on 390 points. Anthony Dunne finished third overall with 361 points.

In the women’s rankings, Leah Maunsell finished first overall with 490 points, the Team Ballyhaura rider finished ahead of Cat Brady in second place with 375 points and Marie Farrell with 303 points in third.

Offering a mixture of technical track and large bike-park jumps, Sunday’s downhill course was a serious challenge for all involved.

Ronan Dunne ended a formidable season by taking the Elite Men win in an impressive 1:48.96 at the GAP.

Neitzke pushed Dunne all the way with an incredible 1:49.58 for second place. Niall Clerkin had a great race to finish third in 1:50.53.

Cat Brady took the win in the women’s senior and junior event with a time of 2:27.67, a victory which Brady was delighted with atop the podium.

In the under-14s, Darragh Ryan won with an unbelievable time of 1:54.17, a finish which placed the youngster 8th in the entire field.

Callum Morris took victory in the under-16s finished with a 1:54.15, another impressive performance.