In our latest members insights blog series, we’re breaking down the highest and lowest average cycle speeds recorded across Ireland.

These insights have been provided by See.Sense, our Official Bicycle Lights and Data Insights Supplier. See.Sense will be continuing to provide member insight blogs throughout 2022, using data insights collected through the free See.Sense app.

For this blog, we’re highlighting the roads with the highest and lowest average speeds, broken down by county. Although not all counties have been included here due to data coverage, the list provides a good snapshot of some of the fastest and slowest roads in Ireland. If you’re familiar with any of the roads featured here be sure to let us know, and if not, make sure to get involved to put your county on the map!

Read until the end to uncover our Top 3 Irish Counties Speed Rankings, as we reveal the fastest county in Ireland!

To kick things off we have the Doagh Road in Newtownabbey, Antrim. The route heads southward from the B90 towards Belfast, with speeds reaching 52km/hr. This road is a continuous downhill, passing from the outer rural edge of the city into a suburban area - with great panoramic views of Belfast. (Just don’t take your eyes off the road to admire the views for too long!) 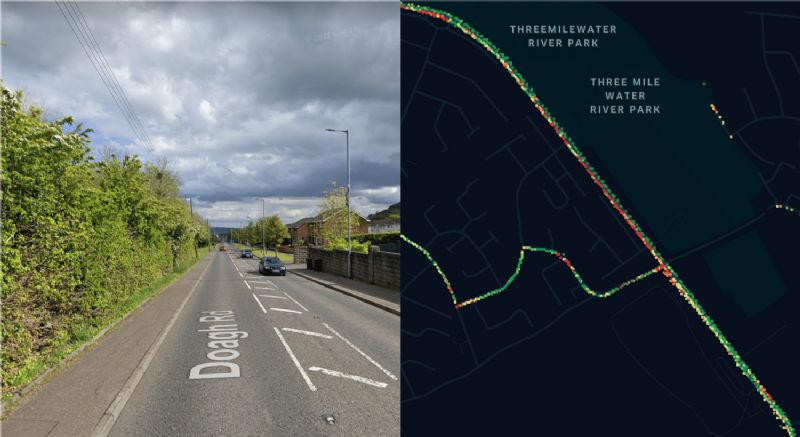 In Down, the Belfast Road heading downhill into Newtownards takes the top spot. This route, which also makes an appearance in our ‘Most Popular Routes’ blog, runs along the Strangford Lough coast. This pleasant route is popular amongst Cyclists who are seeking to avoid the busy main Belfast to Newtownards carriageway.

Another fast road in County Down is the Gilnahirk Road, which heads downhill into Belfast from the Castlereagh Hills - again passing from a rural to a suburban area. There is no cycling infrastructure present on this road. Interestingly, in the data visualisation shown below, corresponding low average speed points (shown in red) are visible further along the road, showing cyclists making the ascent up the other side of the hill.

Highest Average:
The fastest road in Armagh is the A27 - Poyntzpass Road; a single lane, fast A-road that carves its way through the Armagh countryside near the Down border. The highest speeds here have been recorded on a section of the road in between Tandragee and Poyntzpass, reaching over 45km/hr at this point.
Lowest Average:
The lowest average speed in County Down is seen in Bridge Street, Portadown. Consistent data showing gridlock here is visible in our map visualisation. A cycle lane with no separation from main traffic does exist along this stretch, but progress is still slow for cyclists.

Highest Average:
The R257 is a beautiful coastal road along the Wild Atlantic Way, featuring a typical rugged Donegal landscape with rolling hills along the route. Speeds of over 50km/hr were recorded on this steep downhill section after Brinlack, heading southward.
Lowest Average:
The N13 is a busy main road between Letterkenny and Derry / Londonderry, with a side road space where cycling can occur. This is an uphill climbing section towards Manorcunningham, leading to slow speeds as cyclists make the ascent up the hill.

Highest Average:
The highest average speeds in Louth have been recorded on the country road on Táin Way between Carlingford and Dundalk, on the Cooley Peninsula. There’s plenty of speed variation on this route, as the rolling hills and rough road surfaces mean some sections of the road also show low average speeds. On the downhill parts, recorded speeds can exceed 50km/hr.

Highest Average:
In the Royal County of Meath we have a road that could be described as cycling royalty! The R158 between Kilcock and Summerhill is a long and relatively straight, flat country road with a decent surface and likely not much traffic - ideal to build up speed when cycling. The average speeds here reach between 40 and 45 km/hr.

Highest Average:
In Kildare, this road running from the N81 on the Wicklow border through Rathmore village stands out clearly in the data. Cyclists hit speeds of up to 50km/hr on a swift downhill after a steady climb, and like other routes listed, this is a straight, quiet road on a good surface.
Lowest Average:
Maynooth Town Centre can be an urban bottleneck for cyclists, in what is a mostly rural county. Cycle infrastructure is present in the form of a footpath cycle lane on both sides of Main Street, however a lack of a separation means pedestrians often cross over the paths, hindering cyclist progress. This route sees plenty of cycle traffic, and has been highlighted in our previous ‘Most Popular Routes’ blog.

Highest Average:
The R116 is a quiet country road from the Wicklow Mountains, heading north into Dublin City. The highest speeds, reaching up to 57km/hr, were recorded on this consistent downhill featured in the image below.
High speeds are also evident on the Carrickbrack Road, heading downhill away from Howth westward towards Dublin centre. No cycling infrastructure is present here, although the road surface is in excellent condition. Speeds on the Carrickbrack Road average in and around 40km/hr, and can hit up to 50km/hr.
Lowest Average:
The lowest average speeds in Dublin have been recorded on Dorset St, leading onto Drumcondra Rd, on the northside of Dublin. The data shows this road is used heavily by cyclists as a main thoroughfare in and out of Dublin City Centre. Heavy traffic, combined with only intermittent cycling lanes, hinders progress along this route.
Rathfarnham Rd is a similar arterial route on the southside of Dublin that also experiences slow speeds. This is a narrow road, with a shared bus lane going cityward and a slim cycle lane - with no separation - heading in the opposite direction, that leads to slow speeds.

Highest Average:
In Wicklow, the R764 recorded the fastest speeds. This road is a steady downhill out of the Wicklow Mountains, passing the Vartry Reservoir, where cyclists reach over 50km/hr. As is typical, there is a pattern of red data points indicating low average speeds for cyclists climbing in the opposite direction.
Lowest Average:
Nestled in a valley in the foothills of the Wicklow Mountains, the village of Enniskerry and its  Monastery Road witnesses the lowest speeds in Wicklow. The data shows a reasonable amount of cycle traffic, and the low speed pattern as seen in the visualisation highlights cyclists climbing out of the village. Corresponding high speeds are visible on the R117 parallel with Monastery Road (left hand side), along which cyclists are predominantly travelling downhill.

Highest Average:
The R700, travelling downhill towards the River Barrow into New Ross, has recorded the highest average speeds in Kilkenny. Speeds recorded here average around 40km/hr on this quiet country road. 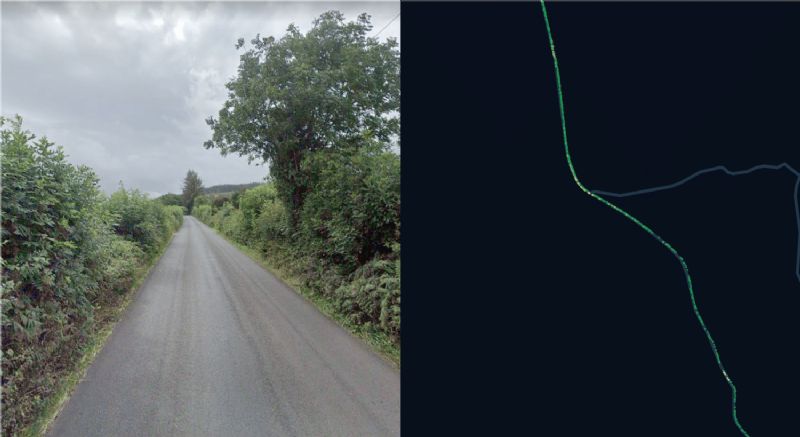 Highest Average:
The R680, heading eastwards towards Waterford City, has witnessed the highest average speeds in the county. This route has no dedicated cycling infrastructure, however it has a high-quality surface and attracts plenty of cyclists. It runs parallel to the N25 dual carriageway, so other traffic heading into Waterford may travel there, keeping this road quieter for cyclists. 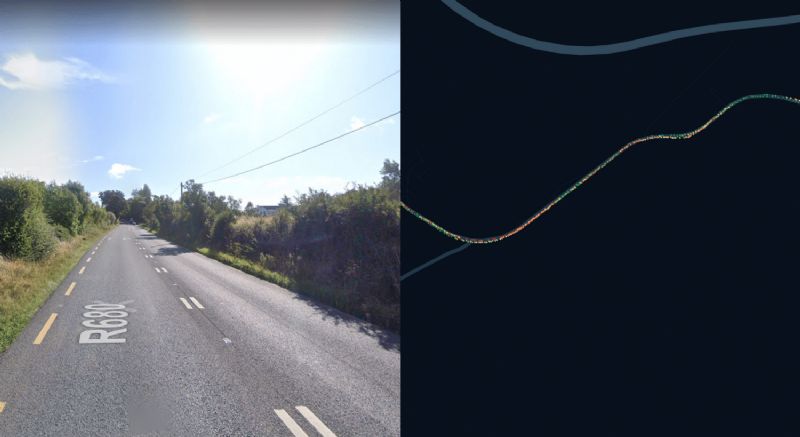 Highest Average:
In Limerick, the Dublin Road heading eastward out of Limerick City Centre takes the top spot. Although there isn’t much specific cycling infrastructure on this road - aside from a shared bus lane on the road side coming into the city - cyclists can still reach speeds of up to 50km/hr.
Lowest Average:
The lowest average speeds in Limerick are witnessed on Henry St in Limerick City Centre. This is a busy one-way street that lacks any cycle infrastructure other than ASLs at traffic lights. The two parallel streets (O’Connell St, Bishop’s / Honan’s Quay) also show low average speed, typical of city centre gridlock.

Highest Average:
An idyllic but challenging cycling route, the Ring of Kerry between Killarney and Kenmare, near Muckross Lake and Lough Leane, has recorded the highest speeds in County Kerry. Needless to say, the scenery here is stunning - the road is winding and narrow, with many steep climbs and descents. The data point map reflects this, showing short stretches of low average speed, followed by a longer stretch of high average speed. 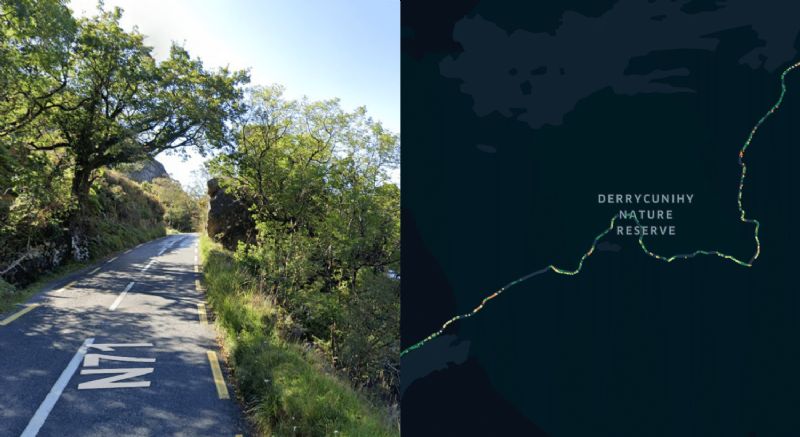 Highest Average:
The R616 heading southward has witnessed the highest speeds in Cork. This is another quiet country road, with its long continuous downhill enabling cyclists to reach speeds of around 50km/hr.
The R611 near Carrigaline, just south of Cork City, is another fast route in the county. This is an L-shaped suburban road, heading downhill into the town centre, that is a popular route amongst local cyclists. Although lacking any cycling infrastructure, cyclists here can hit average speeds of up to 45km/hr.
We hope you’ve enjoyed this overview of some of Ireland’s most popular bike routes, and be sure to give some of these routes a try if you live nearby! Check out our 'Find a Route' section for more routes around Ireland. As promised, here’s our three fastest counties in Ireland!

We will have more data insight member blogs coming throughout the year, so make sure to get involved by anonymously contributing your ride stats using the free See.Sense App. You need to own a See.Sense light to contribute, however Cycling Ireland Membership offers an exclusive 30% discount code off all See.Sense award-winning reactive bike lights - check your membership newsletter to find your unique code.
If your county isn’t featured here, put it on the map! Our coverage is still building in some counties, particularly in areas outside major population hubs, so if you’d like to see your county featured be sure to use your exclusive discount and hit the roads with a See.Sense light.

Not Just A Bike Light

It's not just about the insights. If you own a See.Sense product and have joined the See.Sense community through their mobile app, you’ll see some unique and fun stats about your own rides too. These include:
The distance you've cycled
The calories you've burned
How much CO2 you’ve saved by cycling
More unique and fun stats.
Remember, all Cycling Ireland members get 30% off See.Sense lights!