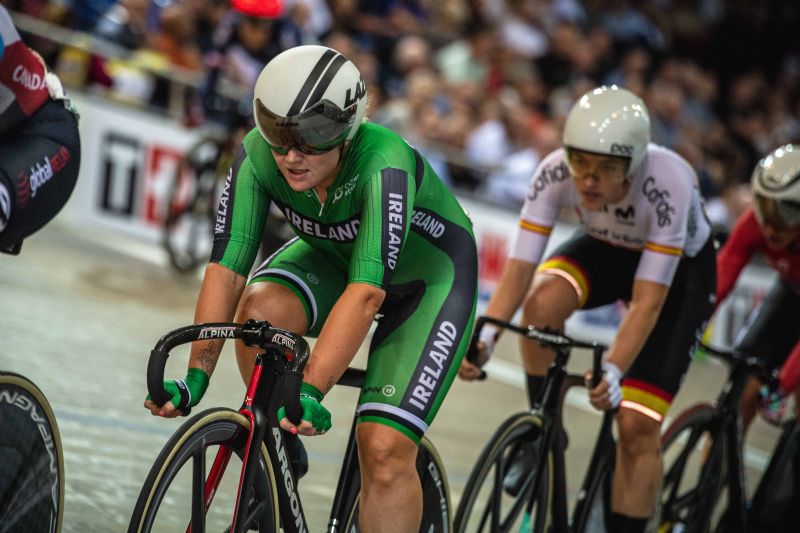 Emily Kay in action at the 2022 UCI Track World Championships

The prestigious league features five rounds of racing across Europe, beginning with the first round in Mallorca on Saturday, November 12th and finishing in London on the 3rd of December.

All riders competing in the Champions Track League are invited to participate directly by the UCI and are able to recruit personal sponsors to help meet costs, rather than compete for their National Teams, however rankings points accrued will count towards their qualification for the 2023 Track World Championships.

The league format will mean at the end of the series, riders will gain an overall place and the points gained from that classification are distributed into their individual rankings in their respective disciplines. points will also be awarded on each individual race in the series.

Emily Kay will compete in the endurance races in her second UCI Track Champions League appearance and will have opportunities to earn rankings points for the points, elimination and scratch races.

Class two points are awarded for individual scratch and elimination races while she has the additional opportunity to gain class one points in the points race - which will be held prior to the evening televised session at each event.

"I’m really looking forward to racing at the UCI Champions League again, it was a great experience last year and it’s amazing to get another chance to race against the best in the world in this exciting race format. It's also really exciting to have Orla join me and have Ireland represented in both the endurance and sprint leagues."

Orla Walsh was invited as a late addition to the series and will race in the sprint and keirin events, she will have the opportunity to earn class two points in both events.

"I'm excited, I've never raced anything like this before. It's a different race platform to the normal racing setup, with the World Championships and European Championships it's quite formal with your coaches and mechanics there and it's quite formal. Whereas in this it's more about entertaining the audience, live coverage and making it a show."

"It's going to be good fun. Preparation-wise, I only got asked last minute to compete since an Australian rider pulled out due to injury. I've been riding on the road a lot in the past two or three weeks - my track bike was still in its bike box after the World Championships - I got back on the track this week and I'm racing today. It's not the ideal preparation but a lot of the other riders competing would have been on their off-season."

"I'm just going to go out there tonight and have fun. Have fun, learn, try not to get nervous and just enjoy the experience. I wasn't expecting to get an opportunity like this so I'm going to try to take it all in."

Saturday’s event in Velòdrom Illes Balears is due to kick off at 6 pm Irish time while the second round in Berlin is set for November 19th.

The racing series offers a unique experience for both riders and fans such as riders' live data such as power output will be used during the TV production.

More information on the UCI Track Champions League can be found here.