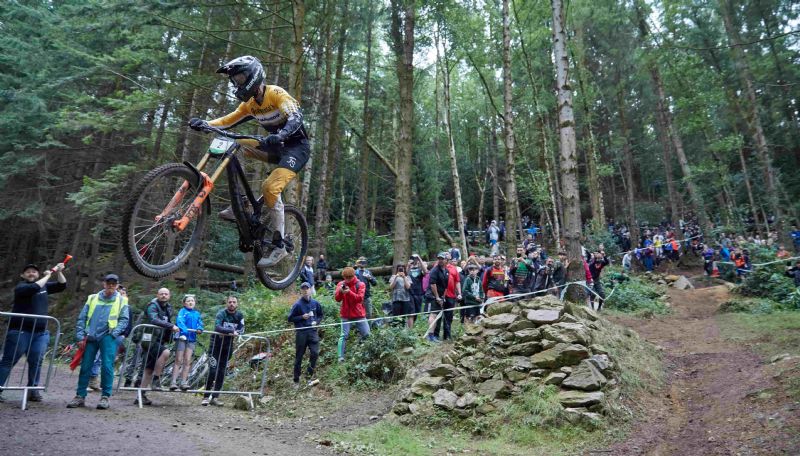 Over 200 riders from all over the country met in Bree, Co. Wexford for the 2022 Downhill National Championships over the weekend of the 23rd and 24th July.

Soon after Saturday practice got underway, consistent light rain fell on the track, bedding down some of the loose dust which had accumulated during the recent dry weather.

By the time the afternoon seeding runs started the conditions were tacky and all riders laid down their best times ahead of racing on Sunday. Dan Wolfe offered a surprise result with the quickest time in the Senior Men category, whilst Leah Maunsell was quickest for the Women.

After a heavy night of rain, the track for Sunday morning practice was a different surface entirely. The showers continued throughout the session and conditions became increasingly slick as lunchtime neared.

True to the forecast, the sun then appeared during the break and a dry afternoon of race runs ensued. A sizeable crowd flanked the road gap at the bottom of the course and all riders experienced an electric atmosphere as they ended their runs with the jump over the fire road.

Ronan Dunne turned on his world class form and took the National title in the Senior Men with a rapid time of 1:42.910. Dan Wolfe impressed in second just 2.666 seconds behind Dunne, whilst Drew Armstrong continued his strong recent form coming third in 1:48.517.

The Women’s National title was won by Meghan Flanagan with a time of 2:15.808. Leah Maunsell, hot off the Enduro National victory last weekend, missed out on the double by just 0.253 of a second, and Hannah Mullin came home third in a time of 2:21.098.

In the open categories (those not racing for National Championship titles) Ronan Gahan won the men’s in 1:54.578 and Agata Grzywacz took first place in the women’s category in 2:50.763.

The consensus from all riders was that Bree MTB Club organised a great race, with a challenging Downhill track and excellent sustainability features including a water refill station and staffed recycling bins.