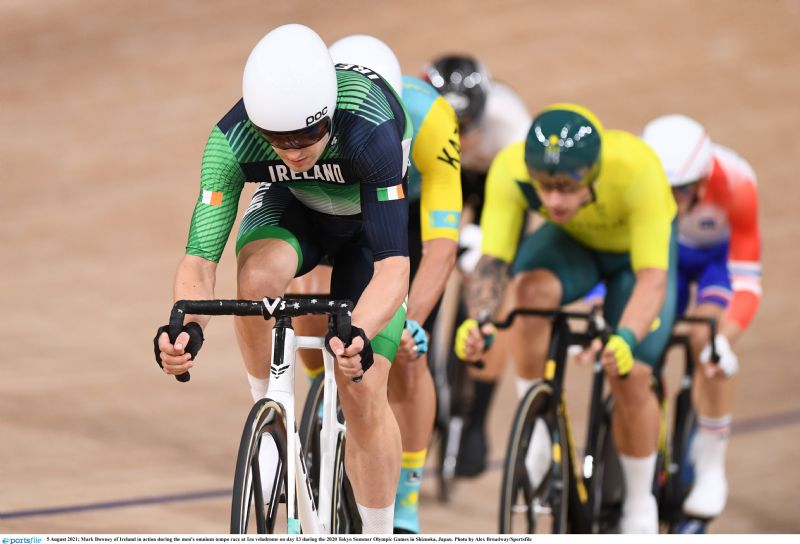 Banbridge cyclist Mark Downey made his Olympic debut in Tokyo following in the footsteps of his father Seamus who competed at the 1984 LA Games.

The gruelling four-event Omnium was first on Downey’s race schedule at the Games. He teams up with Felix English on Saturday for their preferred event, the Madison, raced over 50-kilometers or 200-laps.

After four rounds – the Scratch Race, Tempo Race, Elimination Race and Points Race – Downey finished in 17th position with a haul of 18 points.

Downey started with a 16th place finish in the Scratch race. The Scratch race is a classic first across the line race over 15km for men. Five riders gained a lap on the field while Downey sprinted with a large bunch all fighting for places.

There was disappointment for Downey in the Tempo race as he was pipped for a point mid-way through the race. The all-out effort saw him drop the wheel and loose a lap along with Andreas Mueller of Austria and David Maree of South Africa. That resulted in a 20-point deduction which put Downey in 19th place.

The Elimination race sees the last rider to cross the line at each intermediate sprint eliminated. Selections are made every 2-laps. With speeds averaging 55kph Downey suffered an early elimination finishing 19th.

With Downey out of contention going into the Points Race it was a case of keeping out of trouble and the legs fresh for Team Ireland’s target event on Saturday. He climbed the overall rankings to finish 17th overall.

Speaking after the race Downey said:

“Yeah, didn’t really know what to expect. Obviously still don’t really know what I feel at the minute. I’m an athlete, I like to compete but look it’s my first Omnium at this level. I threw the kitchen sink at it. It’s not a banging result, it is what it is. We got this race off the back of the Madison so I’m looking forward to going again with Felix. He’s super motivated back in the hotel so I’m not too disappointed with the result. The level we know is really really high here so I can’t be too disappointed, and we’ll move forward again.”

“Not the race we wanted but it shows we haven’t focused on it in preparation and training. Given the year that’s in it we were just happy to get a start on the race. It has set us up to build from here, the level has raised, it’s amazing to see what people have actually done through Covid. It is what it is. We have shifted our focus to the main event of this week for us, the last two years we have focused on the Men’s Madison and that’s the main goal on our side. Mark’s head is up, he’s realised you can’t cheat it, that’s not my focus but I’m focused on the Madison and we’re going to get stuck in and represent ourselves well.”