There was disappointment for Madison duo Mark Downey and Felix English as they failed to finish the 200-lap event.

Downey and English looked at home in the bunch for much of the race however lost a lap mid-way through resulting in a 20-point deduction. As with the women’s race, there were several crashes with Poland and the USA both hitting the boards. Fortunately, Ireland avoided any such racing incidents.

As the pace accelerated into the final quarter Ireland found themselves distanced off the back of a splintering bunch. A second lap loss meant they were pulled from the race and listed as a non-finisher in 12th position alongside the USA, Canada, Australia, and Austria. 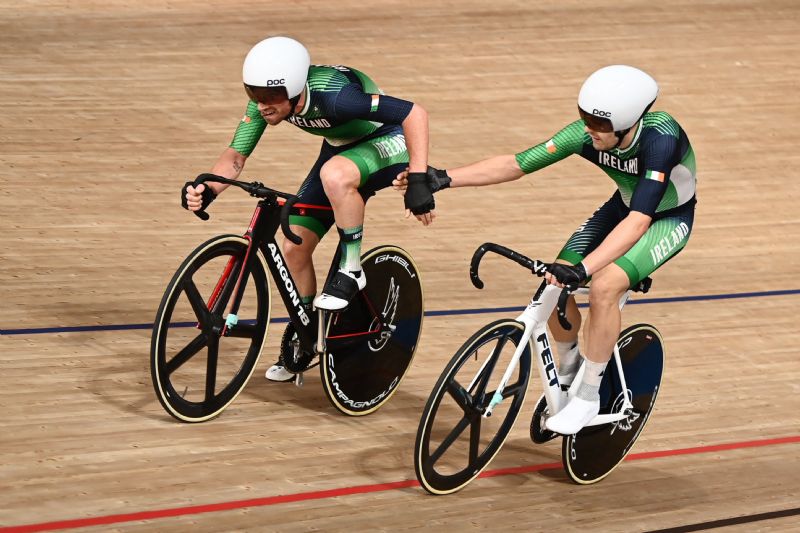 It took just 50 minutes to cover the 50-kilometer distance as teams averaged a blistering 59.690km/h in hot and humid conditions. Pre-race favourites Michael Mørkøv and Lasse Norman Hansen of Denmark claimed the gold medal scoring in 14 of the 20 intermediate sprints.

Great Britain snatched silver by claiming maximum points at the final sprint. France picked up the bronze medal, finishing on the same points as Great Britain but losing out due to their final finishing order.

Felix English gave his reaction after the race;

“That was one of the fastest, well, the fastest race we’ve ever done. We didn’t really know what to expect but it was certainly a shock to the system once we got out there. When it was on the speed was just phenomenal really. It’s stepped up another ten, twenty percent from Worlds last year. Yeah, it was a struggle, we fought as long as we could but ultimately it wasn’t enough today.”

Mark Downey, who finished 17th in the Olympic Omnium added;

“Not really a lot to say, we got here and that’s a good achievement. We want more, and I feel like us as athletes, we can do better but I don’t know how we can get to that level again. There are guys who have just dropped in off the Tour de France and came here. The start was absolute pants; it was lightning quick. The gear (chainring) was small, but you can’t blame the gear. It’s going to take a while to take the positives from it, but me and Felix have had a rough journey to get here, and we said we would give it our best out there today. Look, we have to be proud of the journey we have had, we can’t be disappointed, but just as athletes we want to compete, we want to fight. We want to be there at the end but today we weren’t, so, back to the drawing board.”