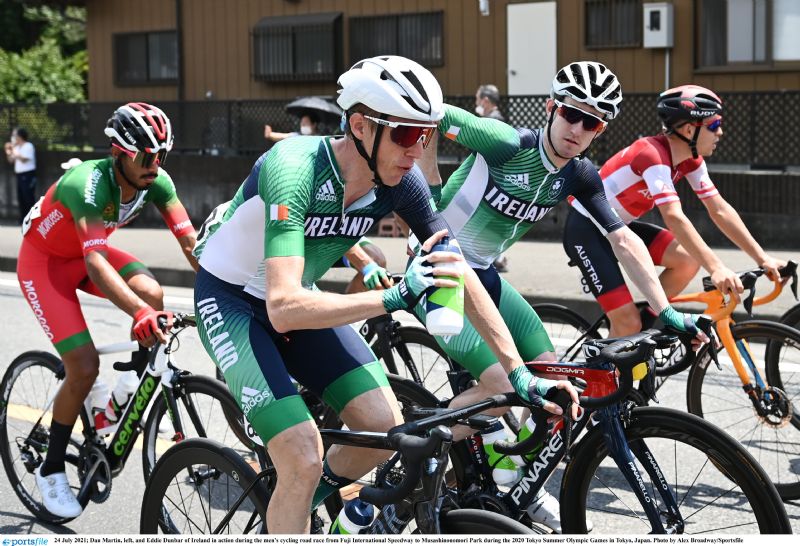 His Ireland teammate’s Nicolas Roche and Eddie Dunbar finished 75th and 76th respectively, both playing their part in animating the race and delivering a top 20 result for Team Ireland.

With 4,865 metres of climbing over a distance of 234 kilometers, the course was considered one of the toughest in Olympic history. The searing temperatures and over 6 hours in the saddle combined to whittle down the peloton with 82 of the 130 riders finishing the race.

24-year old Cork man, Eddie Dunbar said he wanted to put Banteer back on the Olympic map and he aimed to do just that with an attack inside the final 50 kilometers. Dunbar was joined by Remco Evenepoel and Vincenzo Nibali however other nations recognised the danger and acted quickly to close the gap.

The decisive move was made on the Mikuni Pass when one of the pre-race favourites, Tadej Pogačar (Slovenia) blew the peloton apart on the steep climb. The move saw Eddie Dunbar distanced while Dan Martin remained in contention until a kilometre before the summit.

Dan Martin commented after the race:

“We came here with the idea of getting a medal and honestly it’s been my best experience in an Irish team since I’ve been racing for Ireland. We had the best preparation possible; the staff have been amazing, and we really worked together. It was a great team performance and yeah, unfortunately I just didn’t have the legs when it mattered on the climb. It was super-hot there and I just missed a couple of seconds to be in that front selection that was fighting for the medals. We did a perfect race today in my opinion, I wouldn’t change anything that we did today and that’s a really nice feeling coming out of an Olympic Road race knowing that we all did our best. Nico did a great job of keeping me positioned and safe the whole way along and we had staff the whole way along giving us bottles. It really was a great team effort. I want to say thank you to everyone and just unfortunately we couldn't come away with a medal this time but yeah it's really promising for the future, how we're developing as a team. It was really good to race with Eddie as well. I think he’s the future of Irish cycling, so it’s been good to share mine and Nico’s experience with him this week. The future’s bright and we can all look forward towards Paris now and try and improve our performance still.”

“Yeah, it was a very, very tough day. A long day in the saddle. I thought it was a super super performance today by the team, we were out of trouble all day and never dropped outside of the top 30 all day I would say. Nico did a brilliant job keeping me and Dan out of trouble. I followed a move with about 60km to go with Remco and Nibali. Yeah, when you see a rider like that move it's important to follow, I think, given his characteristics and what he's capable of doing. I felt good at the time and you never know what could have happened in a situation like that. It didn't pay off but that’s one day racing, you normally only have one bullet and when you use it that’s it, game over. But yeah, I thought it was a great day for us and Dan finished in the top 20 today, so yeah it was a great day, and a good ride by all of us in the green jersey.”

“Today the tactics were that I would look after the interests of Dan and Eddie to put them in the best position for the finish. Eddie tried to go in an early move with Remco and Dan played the safe card by just waiting and saving himself. Good ride by Dan to make it into the top 20. When we got to the last climb, I just rode my pace and made it to the finish. It’s been an honour for me to ride the Olympics. I’ve had my chance to go for results of my own already three times and I thought it was fair to really commit this time for the other two who were in my opinion stronger for the day.”