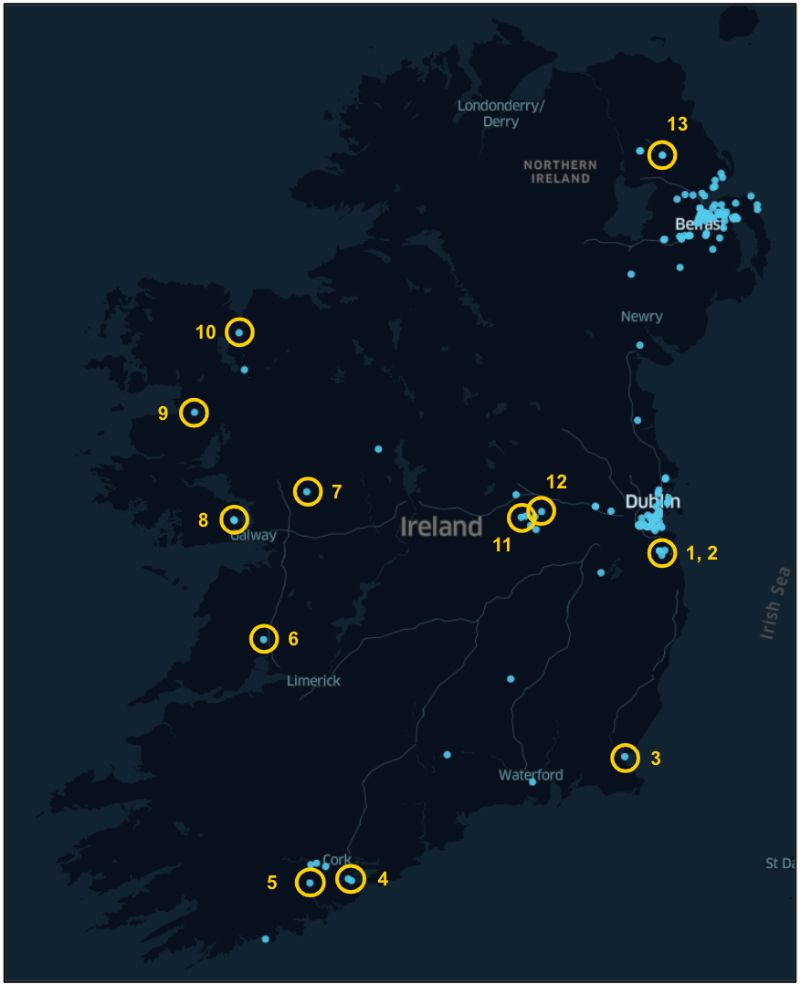 In the latest edition of our members insights blog series, we are examining close pass hotspots across the island of Ireland, with a focus placed on close pass incidents in rural areas.

These insights have been provided by See.Sense, our Official Bicycle Lights and Data Insights Supplier. See.Sense will be continuing to provide member insight blogs throughout 2022, using reports made by cyclists using the free See.Sense app.

However, for this blog we’re examining close pass incidents logged outside of these urban hubs, and placing a focus on the often overlooked infrastructure of rural areas and small towns. These roads can be narrow, twisting, with blind bends and high speed limits - leading to an environment where close passes can frequently occur.

As you can see from the map below, we have examined 13 different incident reports across the island. So, without further ado, let’s take a closer look (no pun intended!)

Our first close pass report is on a narrow, twisting, hilly section of the Barrack Road, which runs south of Glencullen. The reporter commented “Silly to close pass here but cars do it anyway! Sigh.”

Sticking with hilly environments, on a section of the Glencree Road (L1011), north-west of the Powerscourt Estate, a rider has reported that “This is a blind and narrow brow of the hill, continuous bend, white line, and still cars seem to zoom past you without care. This bend is close to home and I would like to arrive safely.”

A report was received on the  R741 road, along Wexford Bridge.  The rider reported “A driver made absolutely no attempt to move out to overtake me on the bridge - it felt very close. My front and rear facing cameras confirmed my suspicions afterwards.”

Moving south-west to Cork now, a cyclist left a close pass report marked at this location along the R612 that runs out of Carrigaline, along the south bank of the Owenabue River. Again, the road is marked with parallel white lines, yet it appears that some drivers are willing to take the chance of overtaking on a blind bend.

Staying in Cork, on this part of the R589, just west of Crossbarry village, a cyclist logged a report of how a “Car and trailer attempted to pass. A car coming in the opposite direction caused the car to veer too close to me while overtaking.”

Moving now onto the west coast leg of our close-pass tour of Ireland, we visit Ennis in county Clare. On the Clon Road, a rider reports of an incident where a “Taxi driver passed very close against oncoming traffic.”

Making our way through Co. Galway, on the N63, just west of Moylough village, a report was lodged saying “Cars passing me on blind bends at high speed.”

On the Clifden road, running north-west out of Moycullen village, a couple of close pass reports were made, with a comment noting a “Close pass by bus.”

Moving further up the west coast to Co. Mayo, a close pass was reported on the R330, south-east of Westport. The cyclist stated that “A car was overtaking us and met another oncoming car. I’m surprised there was not a crash.”

In Ballina, a cyclist had an unpleasant experience when crossing the River Moy. They reported that a “Car decided to overtake me on a bridge exit while turning left, effectively pinning me to the kerb.”

Now making a big jump south-east to Co. Offaly, we can see that a couple of close-pass reports have been made on the R441, just east of Rhode village. One report details how a “Car overtakes me (from rear) on an uphill (Fahy Hill) at over 80kph and within 4 to 6 inches (close pass). The overtaking car kept within solid white line making no attempt to leave room for cyclist. The overtake occurred on a blind summit.”

In neighbouring Co. Kildare, on the R401, north of Edenderry, and just south of Carrickoris Castle, a cyclist reports of a “Very close pass at high speed on junction with potential for vehicle coming out of junction whilst overtake.”

Last on our close pass tour of Ireland, we hop north to Co. Antrim, and the Moorfields Road out of Ballymena. A cyclist riding this route reports on how a “Van passed me at 45/50 mph. Wing mirror was close to a foot away from hitting me. It’s a very wide road and there was no oncoming traffic. The van had ample room to pass. As did the following vehicles behind.”
From the thirteen close pass reports described, a common theme that emerges is the perceived risk-taking by motorists, with numerous reports of overtaking on blind bends and summits, sometimes at high-speed. Another worrying commonality is the lack of space afforded to cyclists when being overtaken, which sadly suggests a lack of understanding and empathy for the vulnerability and safety of the cyclist from a minority of drivers.
However, there are ways for cyclists to make a difference and help to reduce these close pass incidents. We encourage people to download and use the See.Sense App, and continue reporting any issues they experience on their rides. The reports and comments made by you make a real difference. They are an invaluable data source that can inform local authorities on the dangers cyclists are experiencing on our roads, and they can influence transport planning decision makers to improve cycling infrastructure and conditions for cycling in your area.
View more info on See.Sense Report and download the See.Sense App here.
Get Involved!
We will have more data insight member blogs coming throughout the year, so make sure to get involved by anonymously contributing your ride stats using the free See.Sense App to make close pass reports or provide other feedback. You need to own a See.Sense light to contribute, however Cycling Ireland Membership offers an exclusive 30% discount code off all See.Sense award-winning reactive bike lights - check your membership newsletter to find your unique code.
If your area isn’t featured here, put it on the map! Our coverage is still building in some counties, particularly in areas outside major population hubs, so if you’d like to see your local routes featured be sure to use your exclusive discount and hit the roads with a See.Sense light.
Not Just A Bike Light
It's not just about the insights. If you own a See.Sense product and have joined the See.Sense community through their mobile app, you’ll see some unique and fun stats about your own rides too. These include:
The distance you've cycled
The calories you've burned
How much CO2 you’ve saved by cycling
More unique and fun stats.
Remember, all Cycling Ireland members get 30% off See.Sense lights!