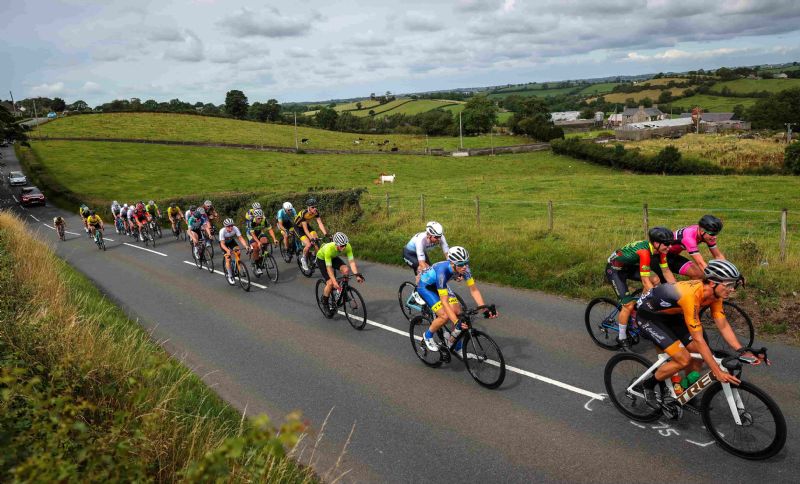 This weekend Carlow and the Killeshin Hills play host to the final round of the National Road Series 2021. The stunning league draws to a close on the famous route of the Des Hanlon Memorial, arguably one of the country’s toughest one day classics. It has been an exciting journey across the country from County Limerick, to County Down and now to Carlow.

The event, promoted by Carlow RCC, is a traditional spectacular raced across the rolling terrain of the Dolmen County. The day’s events will begin at midday and will see A1/A2 riders face a 133km route, the women will take on a 100km route. It will be the final opportunity for the elite men to take the coveted jersey and title of the National Road Series and will make for exciting racing.

There is a stacked field of favourites there with in form Daire Feeley, Mark Dowling and Gareth O’Neill likely to be at the front of the racing. Daire Feeley is the one to beat and will compete in the leader’s jersey with 209 points followed by Gareth O’Neill with 104 points. The winner and the rest of the podium of Sunday’s event will also lay down a clear marker of who to watch in the National Road Championships on October 3 in Wicklow.

John O’Shea, an organiser with Carlow RCC, has said the race will be one of the most exciting in years.

“This means a lot to the club to run the race this year and we are looking forward to welcoming everyone on Sunday. This is probably one of the longest standing races in Ireland and this is the forty first running of it. The race is named in commemoration of a junior cyclist, Des Hanlon, who was tragically killed on Christmas Eve 40 years ago – it was run the year after that and every year since except last year when it was interrupted due to Covid-19.We would view it as, if not the hardest in the country, it is in the top three hardest one day races in Ireland. Multiple winners of the event have been the best in the country and it is fantastic to see how many riders who have also won the Rás have won here. It is very a special race,” said John."

No doubt there will be an army of Scallion-Eaters on the roads of Carlow hoping to see the spectacle of the best of Irish cycling and John has some advice for them.

“The best location for spectators is probably the climb of the Rushes. It is not a particularly difficult ascent, it is at four or 4.5% but the action will be on there and is a good vantage point. It will come with 15 kilometre raced and is surely where the first attacks will go. Another good place to watch is a location known as the Yellow Road. As the bunch go into Castlcomer, about two kilometres up that road, there is long vantage point, where you will be able to see the riders for quite a distance. Another spot would be in Rossmore, near the statue, where the race will be in the Killeshin Hills at that point,” he added.

John said the race means a great deal to those involved and was delighted to share that enthusiasm with fans and racers alike.

“From our point of view there is such heritage in the race, there’s a fantastic list of winners and it is great to see, year after year, all the top riders wanting to win this race. There have been difficult times for the club but it has always got this race on and that has been a great boost. I must send our special gratitude to Athy Cycling Club, Castlecomer Cycling Club and Killeshin Cycling Club who provide the stewards. We need 50 marshals and we wouldn’t be able to put it on without their assistance. We also want to thank the local gardai and Order of Malta for their help and club sponsors, Dan Morrissey, for all their hard work and their continued support. We are really looking forward to seeing everyone on Sunday for what will be a great race,” John added.

Race headquarters will be at Leinster Co-Op Marts on the Killeshin Road, Carlow.