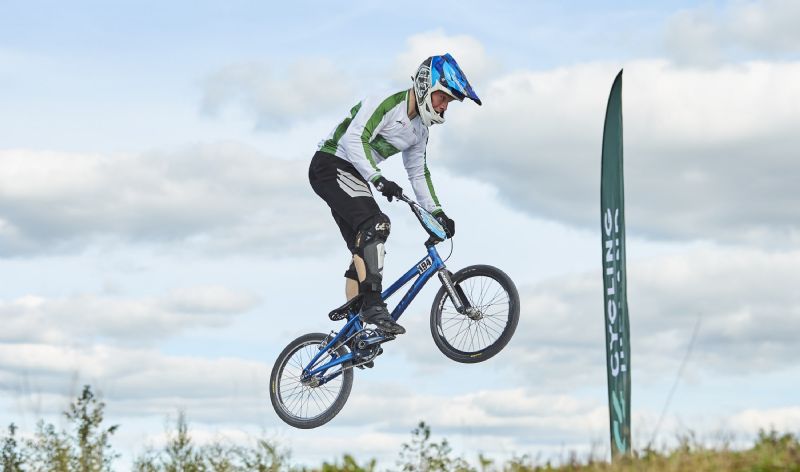 Rounds 7 and 8 of the Cycling Ireland BMX National Series took place in Cork over the weekend of the 17th and 18th September. Cork BMX Club were the welcoming hosts and over 100 riders of all ages took part over the course of the weekend.

The run of good weather for the series continued in the South too, as clear skies and warm temperatures ensured all races could take place without issue.

With Rounds 7 and 8 forming the penultimate weekend of racing, all points were invaluable ahead of the final rounds in Wexford next month.

All eleven categories gave it their all across the two days of racing, including young Daithi Crowley-Peetersoo who rode for the first time and received an enthusiastic reception from the sizeable Cork crowd.

In the Super Class Charlie Jackson won each of the Round 7 Motos as well as the final, with Rueben Byrne in second and Jay Mackness coming home in third. The order was repeated in Round 8 on Sunday with Jackson saving his quickest performance of the day for the final, winning in a weekend’s fastest time of 30.857.

In the Women’s 11-14 and 30+ combined categories, Lucy Groundwater dominated the two rounds, winning on both days and achieving her best time of 41.218 in Sunday’s Moto 2 race. Niamh O’Rouke took the second place in both rounds, and local hero Noelle Noonan came home in third place.

Across the other categories there was a great display of competitive racing with different riders winning in the two separate rounds. Round 7 winners Alex Neville and Donncha O’Hagan had to settle for second place during Round 8 with Freddie Simmons and Evan Bartley winning on Sunday.

Finn Noud won both rounds of the 7-8 age group, Lukas Kennedy took the honours in the 9-10s, Lennon Neville showed some determined racing to win both of the 15-29 race days, and young Samia Hughes rode consistently to win the female 7-10 races. Finally, in the male Masters 30+ Steven McClew won both rounds, with Eamonn Wyer coming second on Saturday and third on Sunday, and Renars Storkis doing the reverse with a third on Saturday and improving to second on Sunday.

The final weekend of racing for Rounds 9 and 10 will take place in Wexford on the 1st and 2nd October 2022 with Courtown BMX Club hosting the racing.