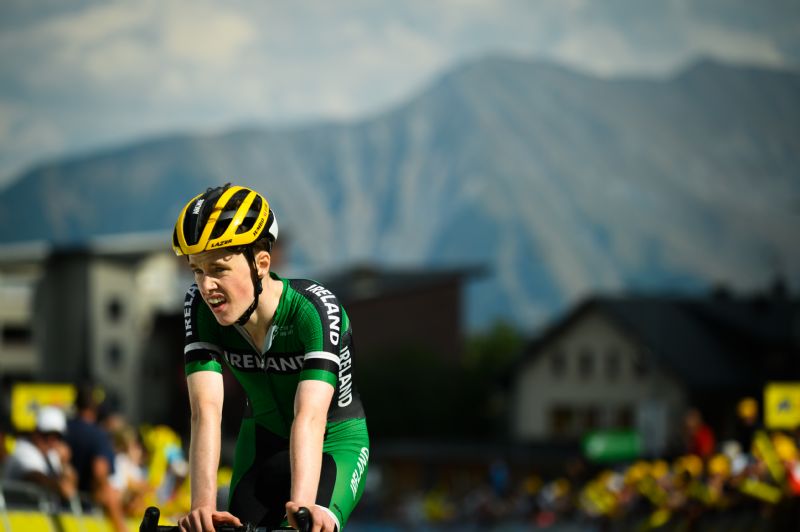 Archie Ryan has more on his mind as he looks back on a ‘successful’ season that saw the young rider pick up his first-ever stage victory in a professional race.

The 20-year-old rising star made waves this year with impressive results in the prestigious Tour de l’Avenir in the summer before a pro victory with Team Jumbo Visma in the Tour of Slovakia and he topped off a fine season with a stage victory in the U23 Ronde de l’Isard.

The Wicklow climber’s stellar season came to an end in France last Sunday, and despite looking back on his exploits with pride, Ryan admits that he was keen to keep racing.

“I was happy to keep on going but at the same time it's nice to sit and look back at a really successful season. It's my best season yet, so I can be really happy with that. I can look back on a good season and be proud of it. It will sink in a bit more as I look back a bit too.”

“I'm back home now, I've got no more races left unfortunately - it's the off season for me. I'm just chilling, taking some time away from the bike just to relax. I'm going to try and not look at it for about a month or so! Then the motivation will be nice and high when I get back to it in November.”

The Team Jumbo Visma development rider caught the headlines in August after some impressive climbing performances saw him earn a fourth place overall finish in the U23 Tour de l’Avenir race.

Racing for Team Ireland, Ryan earned the country’s highest-ever overall standing in the race – which is commonly referred to as the youth equivalent of the Tour de France.

“(The Tour de) l'Avenir was my big goal this season, I pretty much based my season around it to get there in top form. Last year I was out with a knee injury, it was nice to be back racing and preparing for l'Avenir in a good way.”

“I'm really happy with the result there, the team rode amazingly for me. It (the result) was all thanks to them, the riders and staff helping me out there. We got struck by an unlucky sickness, which took out two of the boys. Then two of the boys missed a time cut on one of the really tough days - but they were there until the last stage.”

The best was yet to come for Ryan however as he picked up his first-ever professional stage win at the Tour of Slovakia in September after being afforded an opportunity to race with the Jumbo Visma senior team.

He took stage two victory in an uphill finish, besting some high-profile riders after reaching the final kilometers in a reduced peloton following a tough day of racing.

“It was a surprise, I didn't go in with too many expectations, I had a bit of a free role - it was sort of see who's up there for general classification and go for it if you're there. Thankfully I had good legs and the team supported me in a great way.”

“I was really happy with that result, it's definitely my biggest result to date so I was ecstatic with that. The stage suited me, but it ended up being a twenty-man group sprint, it was just a case of who had the legs left to sprint and I was just feeling good still thankfully.”

And Ryan topped off a successful season with another triumph in the U23 Ronde de l’Isard in France, picking up an eye-catching victory in the queen stage as well as helping teammate Johannes Staun-Mittet to overall victory.

“It was an interesting race, in stage one there was a breakaway that got ten minutes up the road - we had three in there, so it was a perfect situation for us - but then no one else chased, so it was GC out the window for me personally.”

“But we had another GC option in Johannes (Staune-Mittet), who I just naturally became a domestique for. I was feeling good the rest of the days and I was just trying to do my job for Johannes as best I could.”

“On that day (stage five) I still had legs to go for the win myself. I wasn't thinking about it until I attacked because I was so focused on making sure Johannes didn't lose any time.”

“When it all came back together with 700 meters to go, I thought right I'll give it a crack and set up Johannes for a sprint or something - but they all looked at each other and I got away. I was really happy with that, especially after a couple of days of trying to work for the team as best I could so I was just delighted.”

When it comes to 2023, the 20-year-old enters the final year of his development contract with Team Jumbo Visma and hopes to continue to impress and gain vital experience in senior races.

Ryan has been a team leader in many cases this season but can draw upon his experiences last week at Ronde de l’Isard to demonstrate his value as a teammate when his personal ambitions are put to the side.

“Hopefully I can do more mixed-team races, races with the professionals and just high-level races - basically like I did this year.”

“I went into the Ronde de l'Isard as a leader but then the other leader gets into a break and goes ten minutes up the road, and that's okay because he becomes the leader outright and I help him as best I could. He'd do the same for me had it been me in the breakaway, so we've never had any problems with doing stuff like that."