Lydia Gurley is relatively new to track cycling, but she is already starting to make an impact. Gurley recently won bronze in the Scratch Race at the World Cup in Los Angeles 2017, and in doing so has announced herself on the world stage. With the Madison being introduced to the World Championship programme for 2017, Gurley also got the chance to team up with her namesake, Lydia Boylan and compete at the inaugural event, all under the watchful eye of former World Champion in the Madison and Cycling Ireland Track Coach, David Muntaner.


Biography Lydia’s love of cycling first began when she started taking part in triathlons while she was living in Canada in 2010 and 2011. She then moved to England for her education, and decided that she enjoyed the cycling component of the triathlon more than the running and swimming. It was in 2015 when she would take up track cycling, and she hasn’t looked back since. 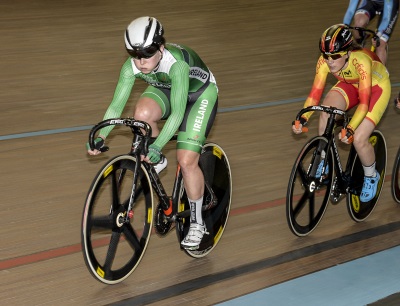 She found the transition from triathlons to track cycling a tranquil one, as the distances she covered in track racing are only usually around ten kilometres, a far cry from the 180km gruelling triathlons she previously had to endure. She says the main difference between the two sports is the level of pain. Track cycling does hurt more, but it’s over a shorter period of time.

Training and practice is essential for learning how to cope with this pain, and Gurley believes that the type of pain you feel on the track is unique and is something you experience less of on the road. She was drawn to the track partly out of curiosity and partly by accident, when she was invited to train with the Irish track cycling squad based in Majorca.

At this training camp, she was in good hands benefiting from coaching advice of Spanish former world Madison champion, David Muntaner. She is modest when it comes to her time on the track. Initially she was the least experienced of the cyclists in the Irish training camp, but she used this lack experience as motivation, and took the opportunity to train with and learn from the country’s best in both hands.

Since the start of March, Lydia has received funding, and is now a full time cyclist. This would come as a relief as Lydia often struggled to find the right balance right between working and training as an amateur. Now that she is being funded, the blanket of being able to eat, train, and sleep, while not having to worry about holding down a job is very reassuring to the Galway woman.

Add to this her studies, and you can understand how stressed and pressed for time she must have been! as she says herself, it’s a lot easier now. Since becoming full-time, the medals have started rolling in; Gurley considers winning bronze in the scratch race at the World Cup event in Cali, Colombia last February to be her greatest achievement to date. However, there’s plenty more where that came from. 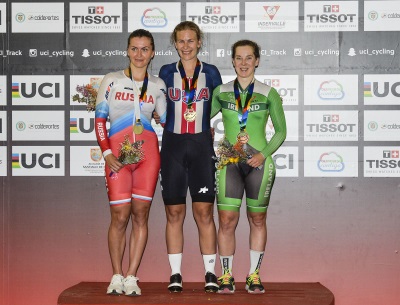 That moment standing on the podium in Cali was a special moment for the tribeswomen, and it’s something she won’t forget anytime soon. The forty-lap race was over fairly quickly. She says the trick to being successful in the scratch race is to be patient and wait until the time is right and the other cyclists start to tire, and then put the foot down! You also have to make sure not to drain yourself too much, making sure you have enough energy to push on towards the latter stages of the event. She developed a good gap early on, and was able to hold and push on from there. The last few minutes were painful, but when she saw the bunch of racers, she gave it everything.

Before a race, her main goal is to make sure her heartbeat is raised because the track races are quite short. As a result of the brevity of these events, there is no room for error. Lydia says that there isn’t much pressure applied to the athletes externally, most of the pressure comes internally from herself. However, when the trainers see that the cyclists are performing well in training, their expectations go up a notch.

Like many athletes, it is the expectations that Lydia would put upon herself that would be responsible for most of the pressure she feels. Her main hope is to try and control and funnel that energy in the right direction. Unsurprisingly, just before the race is the most nerve wrecking for Lydia, but once the race is underway; she has one thing on her mind and that is preforming to the best of her ability. If she continues to achieve this, she’s sure the medals will follow suit.

One of the main issues that frustrate cyclists like Lydia is the lack of an indoor velodrome in Ireland. Lydia believes it would be a massive opportunity and provide a springboard for young riders. It would attract a lot attention from people into the sport especially among spectators, and it would remove concerns about the weather. For Lydia the chance to train and compete in front of an Irish crowd in an indoor velodrome would be a dream come true. The fact that Lydia and the rest of her teammates have done what they have on a global stage without an indoor velodrome only adds weight to the extent of their achievements.

Until then, she will have to stick to training in the relaxed, warm-weather of Majorca. However, for Lydia, and the other cyclists, relaxed is not a word in their vocabulary! The main goal for Lydia now is to go out and display her grit, skill and determination for all to see. She is determined not to get hung up on results, and only wants to show the world what she can belongs at this levels. If that brings medals then so be it.

For every athlete, the Olympics is something that they aspire to and dream of competing in, and Gurley is no different. Lydia is faced with the tough realty that there is not as many track events within the Olympics as there used to be. However, Lydia will be glad that the Woman’s Madison just got introduced into the Olympic schedule for Tokyo 2020.

Lydia’s ambition now is to work as hard as she can, so she compete in the Madison in 2020, if this doesn’t work out she will then look to the team pursuit as an a way of booking her plane ticket to Tokyo. Either way, this certainly won’t be the last time we will be hearing about Lydia Gurley.