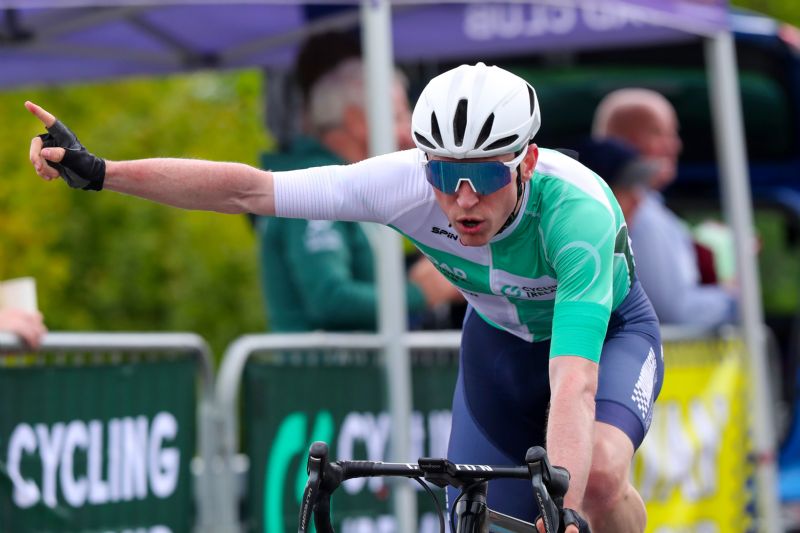 The roads of the Royal County played host to a dominant performance by Matthew Teggart while women’s cycling stalwart Eve McCrystal returned to Irish roads with a solo victory in round three of the National Road Series (NRS).

The Junior race also saw a smooth is fast approach from Adam Gilsenan who has returned from Italy to win his second race in the series and deal with the minor life event of the Leaving Certificate.

Whether it is the climbs of Carlow, the narrow borreens of South Limerick or the green plains of Meath Matthew Teggart has been unbeatable this season and he proved that again on the roads around Dunshaughlin, Co Meath.

It was bright sunny day but it was a gusting breeze that played a huge part in proceedings across all races. The course was, from its profile, an unchallenging event but it was those weather conditions that set the tone for the race.

Teggart has won all three rounds of this year’s NRS and is now in pole position to continue the trend.  The Ulster man has used his tactical experience and form to dominate each race and today was no different. From the earliest kilometres a large group of riders went clear and built a solid 50 second lead. There were plenty of counter attacks from the riders who missed the break, using the drag to launch desperate efforts to bridge across.

By the last lap the race was yet again in a state where Teggart had whittled down his opponents and reduced it further to four riders. As they turned into the last 300 hundred metres it was down to a sprint and the Ulster man sealed his third series win.

“I’m really pleased with that. That was the aim for the day was to take three from three. A pretty flat and honest circuit so really fast racing all day. A group of about ten of us got away early on, we pushed fairly hard on a drag and it split up. It was just a real honest fight all day until the last lap – four of us clipped away and then us four played a wee bit and I backed my sprint and I had the legs to get it in the end. Wind played a part in the race. Without a really decisive climb you need the elements – wind and the weather. It was a really fast tail wind up one of the drags and that played a big part. It stayed draggy for a long time. It was about being in the right position and that helped me today. I would prefer a more hilly race but with the right tactics and right conditions can split it up on a flat day too,” he added.

Teggart now hopes that he has done enough to take the series with just two events to go.

“I’m definitely in the best place possible after three rounds – the aim is now to hang on and win it out right,” he said.

The women’s race saw a similar dominant display with Eve McCrystal taking a classy victory leading from the front for the whole race. In fact as the flag dropped she took to the front and set the pace and by the second passage of the climb she was up the road having fractured the pack into two distinct groups. There were plenty of attacks but the last lap saw McCrystal use her power to ride clear on the drag and the tree lined drag to set up a solo win. 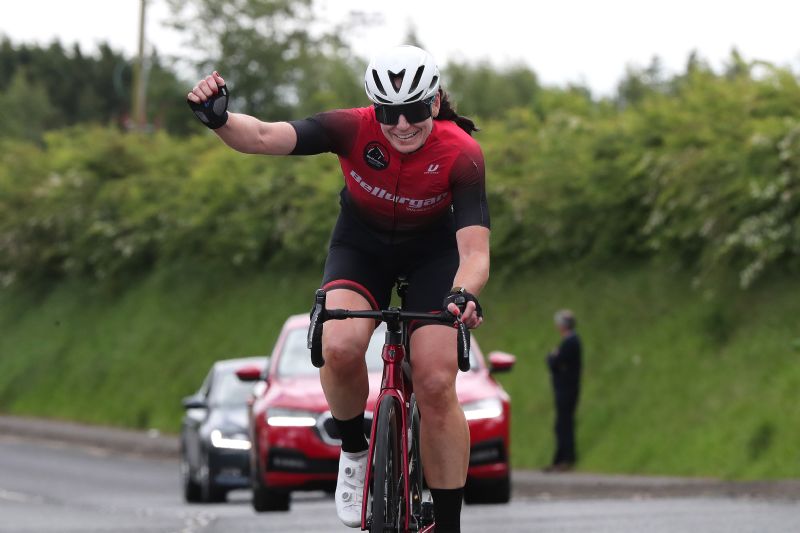 At the finish she spoke to Cycling Ireland about her joy to be back racing on Irish roads.

“It was fast and rolling – we stayed together for the first lap but on the second lap there was a sharp climb so I just went hard up the climb and it split the bunch. I attacked a few times but to no avail. The last time up the climb at the back end of the course I went again and got a gap – it was a lovely course and it was enjoyable with the headwind coming in the motorway. It is great to be back on Irish roads and in our group we had two juniors which was great. Every one worked hard to stay away. It was a huge field of women today and it is brilliant for everyone to see that it is growing and growing and the level is growing and growing. It pushes someone like me, an older one to keep on top of the Juniors so it was a great day,” she added.

The junior race saw Adam Gilsenan repeat his win in round two in Limerick with a stunningly composed sprint for victory. Gilsenan is currently based in Italy but has returned home to complete the Leaving Certificate. He is a shrewd and canny rider and used that poise to good effect today as he took victory in a stunningly timed sprint.

“It was a nice race today – a bit harder than the last round in limerick. It was hard to get away. With 2kms to go myself and Quillan Donnelly got away and we were lucky to stay away to the finish. The climb was harder than I thought it was going to be and the wind made the course a lot harder than it was going to be. Didn’t ride the first round and missing points there so think I’ll be up there,” he added.

The next big event will be the State exams he said but is looking forward to getting back to the bike. The study is going all right, back here for the leaving and then once that’s done I’ll go back there then,” he added.

Despite Gilsenan taking two wins he is still behind in the National Road Series jersey stakes as Patrick O’Loughlin’s harvesting of points in all three events keeps him in the overall lead.