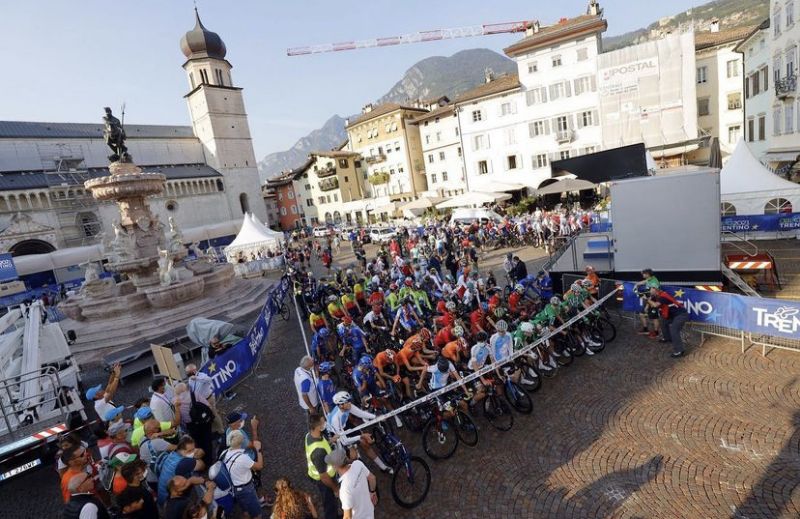 It was a busy day for Team Ireland at the European Road Championships with three teams in action. The challenging 13.2 kilometre circuit around Trento that features the Povo climb, 3.6km of a climb at 4.7 per cent was a big test for the riders. It was a tough day for all riders with over half of the starters in each category being forced out of the races.

The Junior Men’s team were first to the start line this morning. The team included Darren Rafferty who placed fourth in the Time Trial two days ago and Junior National Champion Ronan O’Connor. They were joined on the start line by Conal Scully, Adam Gilsenan, Dean Harvey, Ruairí Byrne.

Rafferty was very active throughout the race. Coming over the climb in the final lap Rafferty was close to the front but just missed out on the move as a three-man group got clear of the bunch. The trio maintained a small gap over the bunch for the closing kilometres of the race. In a sprint for the finish, French rider Grégoire crossed the line first to take gold ahead of Hagenes and Martinez. Rafferty finished in the bunch placing 35th.

Ronan O’Connor had an unfortunate fall on the final lap which knocked his chances of placing well in the race. Determined to complete the race, O’Connor made it to the finish line placing 70th overall.

Dean Harvey experienced hard luck today having to switch to a spare bike early on. He battled hard to make it back but unfortunately couldn’t. Riders who were dropped were not given an opportunity to finish the race and were forced out of the race.

Aoife O’Brien, the sole Irish rider in the Junior Women’s race had a brilliant start to the race. O’Brien did well to stick the pace in the searing heat but ultimately got dropped and was forced out of the race. It was a huge learning curve for the young rider, one that she has enjoyed.

Caoimhe O’Brien, Darcey Harkness and Lucy O’Donnell competing in the U23 Women’s team were unfortunately dropped and forced out in what was a very hard race in hot conditions.

Team Ireland were admirable in their efforts today and have gained valuable experience competing at a major event. For many, this is their first international event which will most definitely stand to them going forward.

The championship continues on Saturday with the U23 Men’s Road Race which gets underway at 8:00am while the Elite Women’s Road Race begins at 1:15pm.