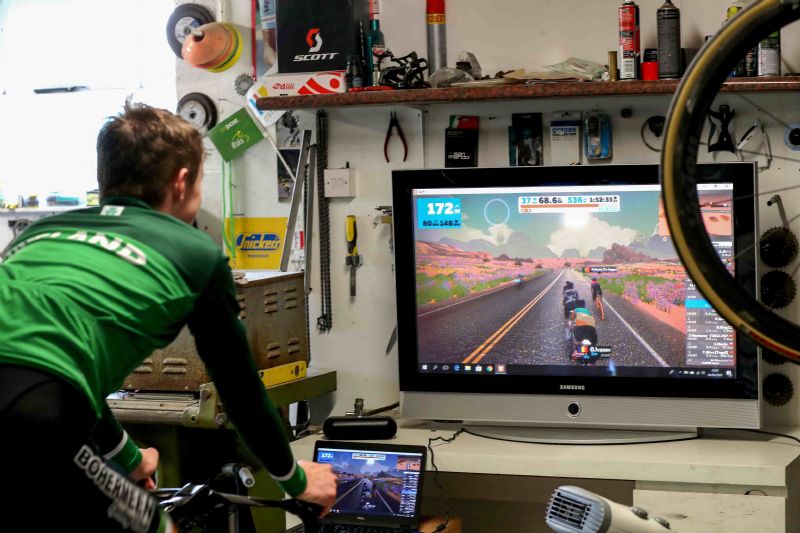 A five-strong team of Irish riders will represent Ireland at the 2022 UCI Cycling Esports World Championships which will take place on Saturday, February 26th.

Nicolas Roche is one of three riders that will compete in the elite men’s category. Since retiring from professional racing in October 2021, Roche has taken to indoor racing while also preparing for and competing in Dancing with the Stars.

Roche will be joined in the elite men’s race by Chris McGlinchey and Richard Barry. McGlinchey will represent Ireland for the second time on the virtual stage after competing in the inaugural Cycling Esports World Championships in December 2020 where he finished in 13th position. McGlinchey has been on top form of late having recently claimed the inaugural Cycling Ireland eRacing National title along with the Cyclocross National title just 6 days prior to that. Richard Barry of St. Finbarr’s who claimed bronze at the Cycling Ireland eRacing National Championships rounds off the elite men’s Irish team. Barry will be looking forward to the challenge of the World Championship course which features 944m of elevation and a 6.1% gradient on each lap.

Imogen Cotter and Mary Corless will compete in the elite women’s race. Now based in Girona, the current national road race champion Cotter is no stranger to eRacing having spent 2021 competing for the Movistar E-Team. Cotter finished first in the qualifying event for the eRacing National Championships in December however was unable to attend the in-person finals. Corless, a triathlete from Galway has shown her class of late winning the eRacing National Championships. The rider from Tuam timed her final effort in the final to perfection putting in a strong effort on the final climb to the finish line to secure victory a few seconds ahead of Vanessa Fursden and Claire Richardson.

The Esports World Championships takes place over the New York, Knickerbocker course. The total distance will be 54.9km and 944m of elevation. PowerUps will feature during the race with a total of 7 chances for riders to collect PowerUps along the route. What PowerUps the riders choose to use and when they decide to use when will play a key role in the riders’ bid for glory.

The winner of the men’s and women’s events will receive the UCI Cycling Esports World Champions Jersey incorporating the famous rainbow stripes, earning the right to wear a physical jersey during the sanctioned esports races and activities they take part in throughout the following year. The winners will also be able to wear a digital version of the UCI Cycling Esports World Champions Jersey, whilst on the Zwift platform.