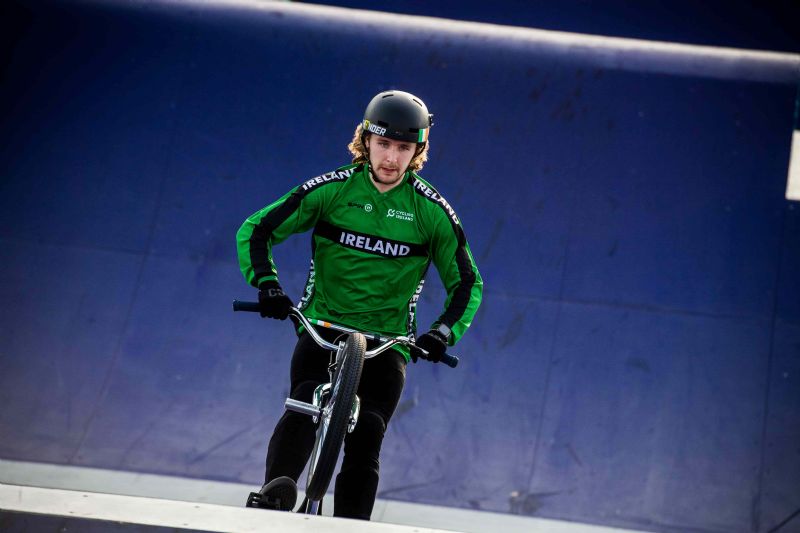 Ryan Henderson admits that competing in the BMX Freestyle Park at the 2022 UCI Urban Cycling World Championships will be a dream come true.

The east Belfast rider has been selected for Ireland after an impressive 10th place finish at the European Championships and now heads to the World Championships in Abu Dhabi from November 9th to 13th.

Henderson will make history as Ireland’s first-ever representative in the event after achieving the same feat at the European Championships in Munich in August.

Ahead of the Championships, Henderson looked back on the strides made in 2022 as he looks to build on his Euros performance.

“This year has been a big step for Irish BMX just with the Euros happening as well. We're super excited, it's been a dream so I'm glad it's finally here. I was happy with the way the Euros went, with the scale of things and that being Ireland's first time in a major contest like that - to get to wear the jersey. It was a big step for us and I'm glad we got the result we were looking for.”

Henderson trains at Thunder Park in Bangor but was invited to take part in a training camp with the French national team in Montpellier from October 22 to October 30 after forging a relationship with the team at the European Championships.

An opportunity to train amongst some world class riders, Henderson hopes he can learn from the experience ahead of the World Championships.

“With the way things are back at home, we don't actually have ramps to the scale that we need. I ride in Thunder Park in Bangor, it's got me this far and it's amazing that I get to ride there, but we needed ramps that are going to be similar to what we're riding in Abu Dhabi.”

"I did two trips leading up to Abu Dhabi, last week I was in England doing a contest to keep me active. The French (team) have a really good training camp going on (right now), we developed a good relationship with them from the Euros and they invited me out.”

“It's been amazing so far, learning off the guys, not only how they work things. I always ride by myself, and it can be a bit hard at times because you need people to feed off so to be able to ride with these guys out here is quite good. Right now, France is leading the way. Just seeing how they work things is quite interesting and hopefully I can pick up on some things and bring them with me - just to build the confidence and polish off on the tricks.”

The Championships will provide the first opportunity to qualify for the 2024 Olympics and as Henderson targets qualification for the Paris games.

“That's the goal right now, that's what we're working towards. We're quite new in the way things are and how structured and strict it is. We're obviously not used to this so we're just trying to learn along the way - seeing how the other countries work things and seeing what suits us best.”

Cycling Ireland High Performance Director Iain Dyer is delighted that Henderson has been selected as he wished him luck in the championships.