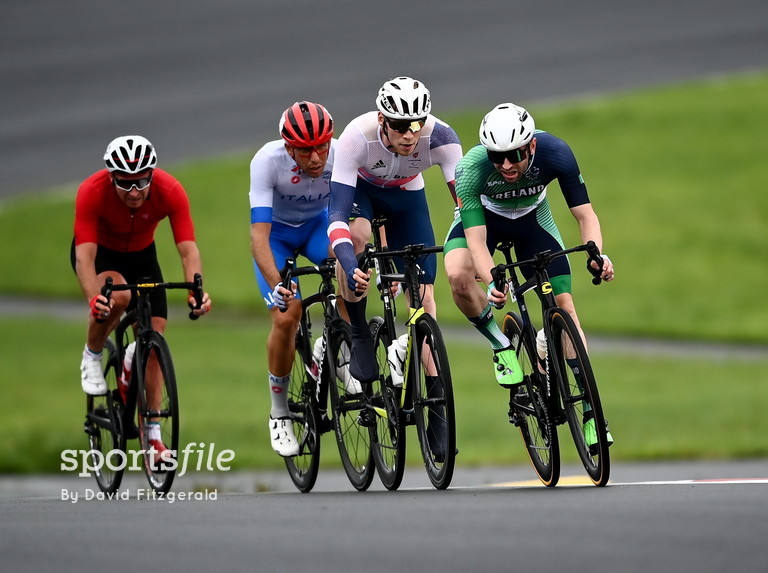 RONAN GRIMES’ road race was a tale of good bike handling and a solo ride to the finish.

The Athenry man had come off the track events with an impressive fourth place so he took to the road circuit with some hopes.

The weather had closed in on the Fuji International Speedway with banks of sheet rain filling the skies above the famous race way.

At the death the French rider Kevin Le Cunff, launching a huge attack with 2km to go from Ukrainian Yehor Dementyev sealed the gold.

Ronan said: “After the first lap, there were 11 of us left. It was hell for leather out there.

“Then starting the second lap I slid out on one of the corners and I kept the bike upright, then there was a crash coming down under the bridge my bike jack-knifed and I slid up against the wall.

“When I came out from underneath the bridge I couldn’t get back on and I was out there for two hours by myself. It was a long day, but it was an honour to do it,” he said.

For Ronan it has been a real honour to pull on the Irish jersey in Japan.

“An honour to be here. I think every race I performed as well as I could. On the track I was unlucky with the fourth place but it was a performance to my best. Here in Fuji I am happy with how I performed here too.

“I am happy with my games, I couldn’t have done better,” he said.

Ronan said he will take a break from the bike and then refocus his efforts for the upcoming World Championships.

“The big question for me. I don’t think I’m getting any slower so as long as I keep getting faster on the bike I will keep going. I think I am not too far away from a big result. The time trials on the road depends on the course but the velodrome I think I definitely have more to give there.

“I’ll take a break and then refocus for the World Track Championships in March of next year which aren’t that far away as soon as I get back to racing.

“If I keep getting better next year I will keep going. Three years is a long time to Paris so I won’t commit to anything but I won’t make any drastic decisions either,” he added.