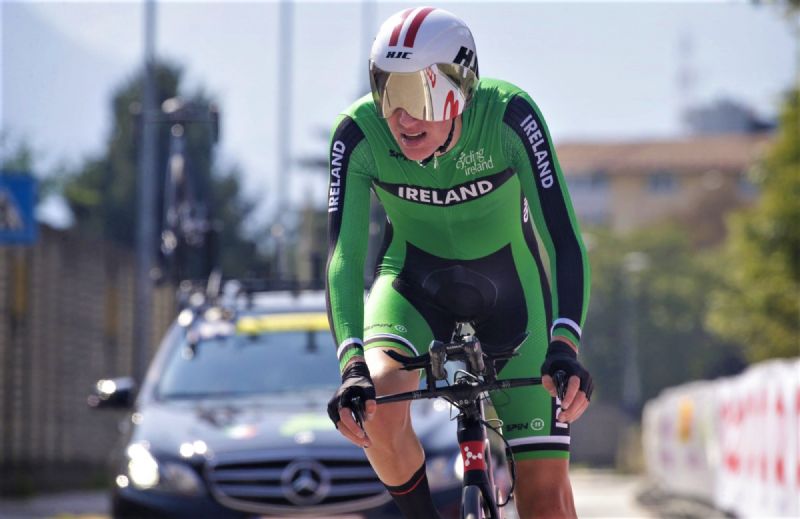 Darren Rafferty powered through a tough 22.4 kilometre Time Trial course finishing 4th in a time of 27:09:09, narrowly missing out on the bronze medal by just over two seconds.

Scully was first to take on the Time Trial course, averaging 47.39kph to finish in a time of 28:21.49, putting him in 21st place. Rafferty went even faster averaging 49.50 kph finishing 42.48 behind the leader to finish in 4th position.

The race against the clock was won by Alec Segaert of Belgium in a blistering time of 26:26:61, averaging 50.83kph. Fellow Belgium teammate Cian Uijtdebroeke claimed the silver medal in a time of 26:31:70. French rider Eddy Le Huitouze finished in 27:06:99 to claim the bronze medal ahead of Rafferty.

Speaking after the event, Rafferty said:

“I’m super pleased with 4th at the Euros but obviously a touch disappointed to be so close to a medal but overall it went really well and I couldn’t really expect much better.”

Despite some nerves, Rafferty was confident leading into the Time Trial and believed he had prepared as best he could with the team, he said:

“I had prepared as best as possible in the lead up and the setup with the team had been great so I was as confident as I could be I think with some usual nerves before the race.”

Scully and Rafferty will be joined by Ronan O’Connor, Adam Gilsenan, Dean Harvey and Ruairi Byrne for the 107.2 kilometre Junior Men’s Road Race on Friday morning.

“I’m looking forward to the road race on Friday morning. The course seems to suit well but a lot can happen in the road race so I will just wait and see how it plays out.” Rafferty added.