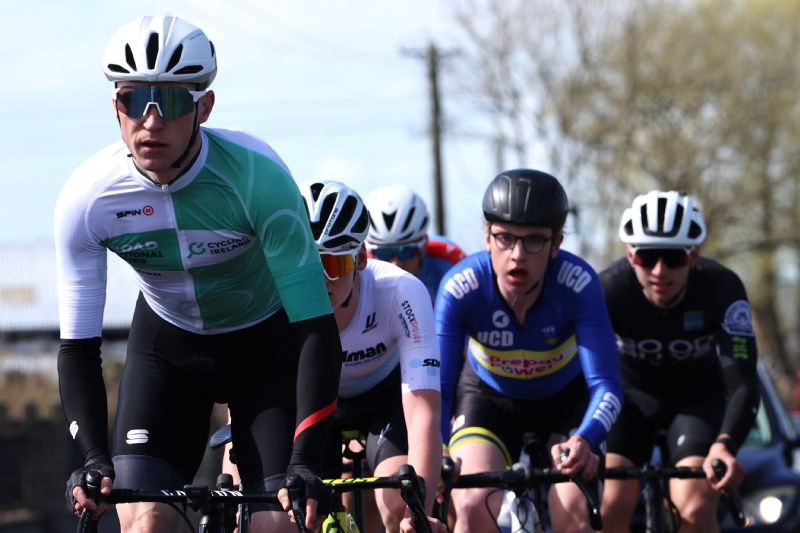 ROUND THREE of Ireland’s premier cycling event the National Road Series will strike for Dunshaughlin, Co Meath this weekend.

The Navan Road Club plays host to the 22 May race festival which will see Ireland’s best road men and women hunt for points and prestige around the midlands roads.

So far the home peleton has visited Carlow for the mighty Des Hanlon Memorial over the imposing Killeshin Hills and round two on a testing course in South Limerick.

The national road series awards consistency and as it stands the leaders of the pack are Ireland’s best.

Teggart’s biggest challenger will be Conor Murnane of UCD Cycling Club who is on 53 points to the Ulster man’s 80.

In third place is Gareth O’Neill with 43 points but it is riders like Daire Feeley and Dean Harvey, who has taken a huge victory in the Shay Elliot recently who could really set the pace in Meath.

Caoimhe O’Brien’s victories come from her powerful sprint but she is under pressure from Ella Doherty from UCD Cycling Club with 55 points and Gabriele Glodentye who is unattached and on 44 points.

While the Junior event is a tie on 70 points each for Niall O’Loughlin from Westport Wheelers Cycling Club and Patrick McLoughlin of Panduit Carrick Wheelers – Navan could well separate the riders.

Now they head to County Meath for what will be an exciting opportunity for them to take a step closer to overall victory or for a pretender to the throne to seize the initiative.

Organiser, Niall Doggett of Navan Road Club believes that the event is still up for grabs and this weekend’s race will be a crucial moment for those in pursuit.

“We’ve had two fantastic editions so far – Carlow and Limerick have been fantastic and the racing has been hugely entertaining.
“This weekend is all about taking it to Mathew Teggart and Caoimhe O’Brien for the seniors while there is a real battle raging in the Junior mens.
“Meath and the general area around Navan is a cycling heartland so we expect the roads to see plenty of spectators and the course is well suited to exiting and dynamic racing.
“This is a huge opportunity for riders to take on the top ranked riders and overhaul them and with this superfast and winding route it can really see anything happen,” he said.

The course will see the various pelotons start and finish in Dunshaughlin with each lap covering 24kms on fast rolling roads.

Race Two will be the Junior men leaving at 12.05pm.

Race three will be the Senior and Junior women starting at 12.08pm.