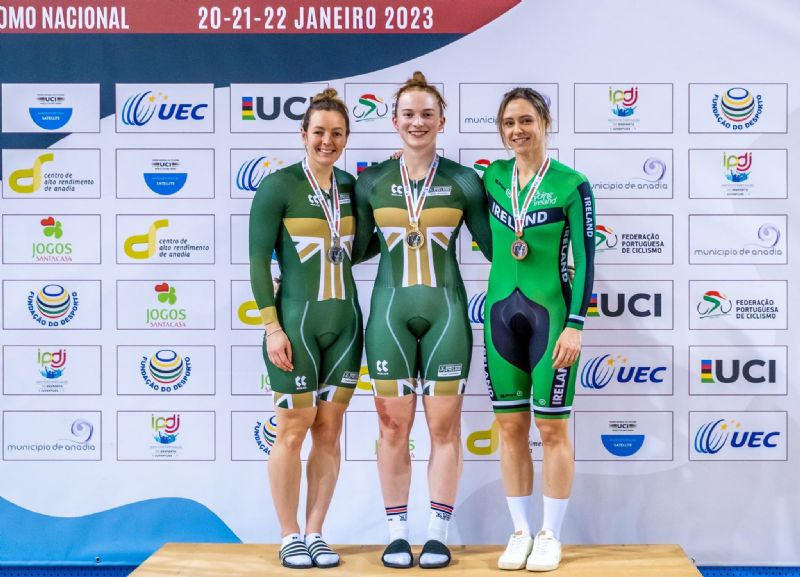 Five riders represented Ireland at the Class 1 event that ran from Friday, January 20th, to Sunday, January 22nd at the Velodromo Nacional Sangalhos in Portugal.

With the European Championships set to get underway in just over two weeks, Walsh, Lara Gillespie, Emily Kay, Alice Sharpe and JB Murphy were all in action as they continued their preparations.

And sprinter Walsh was in fine form, earning a bronze medal in the women’s sprint on Friday before following that up with a bronze once again in the 500m TT on Saturday.

The Dublin native made it three from three on Sunday with bronze in the keirin to underline an encouraging weekend as she builds towards the European Championships.

Lara Gillespie also recorded a strong performance in Saturday’s women’s omnium, narrowly missing out on a podium place with a 4th overall finish.

It was a busy weekend for Sharpe, she finished 13th in Friday’s points race and impressed with a 5th placing in the scratch race on Sunday.

JB Murphy also enjoyed some valuable time out on the track just five days after an impressive showing at the Cyclo-cross National Championships.

In his second international track event after returning from injury in late 2022, Murphy finished 17th in the men’s omnium on Saturday after a 22nd place showing in the points race on Friday.

Murphy concluded his weekend as he finished 19th in the scratch race.

The Track European Championships get underway on February 8th with Ireland to be represented by an eight-strong team at the championships.