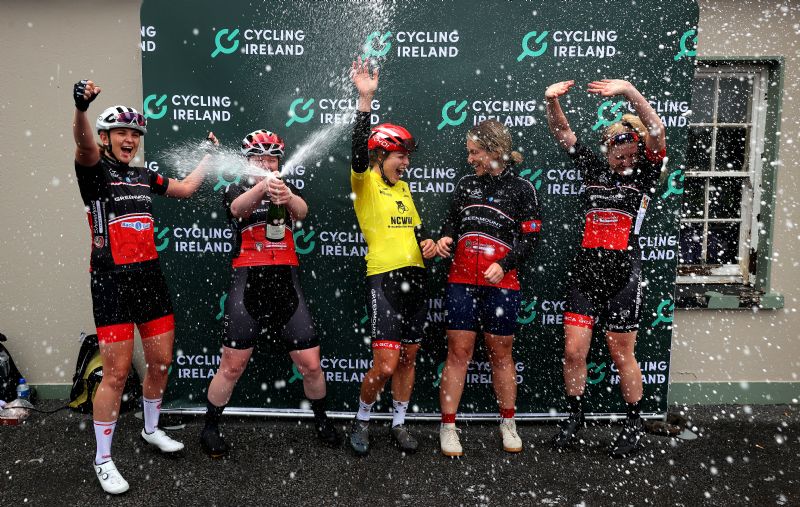 ROUND Two of the National Road Series finished with a dramatic day that saw testing attractional racing with the yellow jersey decided in the closing kilometres.

The south Limerick village of Knockaderry played host to the Visit Newcastle West four-day stage race. The Ladies and Elite A1/A2 category all were competing for the National Road Series Round 2.

This time round the riders were competing in a four-day stage race with an 8.8km Prologue on Friday. Stage One on Saturday saw the riders head for Broadford, Co Limerick where there was a circuit fit for the sprinters. Stage Two on Sunday was one for the climbers as it traversed a hilly and demanding course racing on a 26km loop which came through the village of Kilmeedy.

Then Monday’s stage, was well fought over rolling terrain for Stage Three also with a 17.4km loop around Knockaderry with Kilcolman Peak surely a scene for the climbers to take advantage of the terrain. This was the same route as the 2020 National Championships and is fast earning a reputation for high power numbers and hard racing.

Monday started with the ladies racing over the same course as they did at the National Championships. Fiona Mangan, of Greenmount Cycling, led the field in the yellow jersey.

After a race full of attacking in what was developing into a rain sodden morning the women fought their way around the rolling route.  As they rolled in for the final sprint Fiona Mangan rushed forward, winning the stage and taking the yellow jersey by a number of bike lengths.

She said after her victory:

“Yesterday I was battling for the yellow jersey and I am delighted to have it today. We were all about defending it and it was so great to have the team behind me. It went just as planned, we sat together and caught everything that went away. My plan was to attack and go away but I tried it sooner in the stage but I got caught. I got in the last Kilometre – I am really delighted,” she said.

Shortly after 12 midday the A1/A2 field rolled out into deteriorating weather. With standing water and streams rolling down the steep climb to the start/finish area the riders began to suffer the impact of incessant rain.

There were multiple attacks, in fact each lap had a repeated change in the structure of the peloton. But as the race, with a distance of 153kms, wore on the atritional nature of the course combined with the weather left a reduced field of big hitters.

The last three laps were defined by a three man group who built a lead in excess of two minutes at one point.

Chris McGlinchey chased hard, limiting that. But still the small group which included Gareth O’Neill, Mark Dowling and Daire Feeley forged ahead.  With two laps to go Liam Curley appeared at the front, launching a massive attack to reach across to the group in front. He bridged across and then set about making the race his with a powerful, clever ride.

As they appeared into the finish straight in Knockaderry for the last time Curling and Dowling were in front of Gareth O’Neill by 18 seconds. Curley took the win in a sprint with the exhausted Dowling taking second. 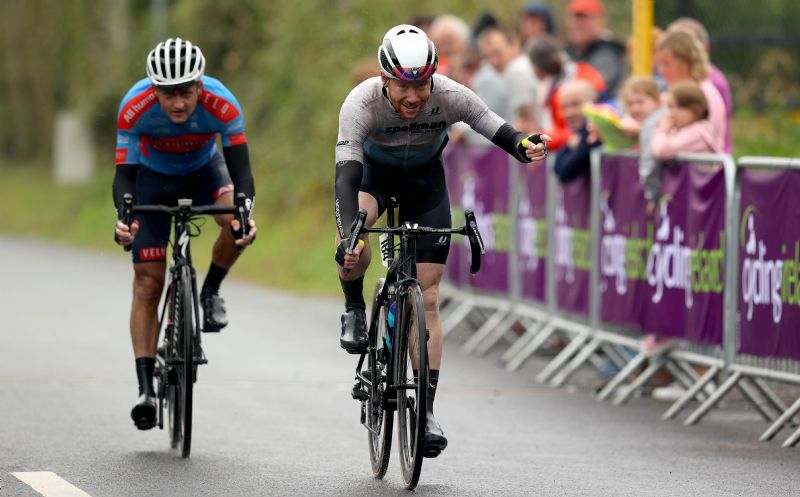 Curley took the stage and the yellow jersey in the difficult conditions.

He said: “I feel great. Can’t believe I won it. I got away with two laps to go, the gap was two minutes and I felt it was impossible to bring it back but we just kept working.  We caught the front with ten kilometre to go. In the last two kilometre Dowling attacked but I stayed with him and got it in the sprint. We were trying to put pressure on the yellow jersey and I didn’t really have a plan we just took things as they came."

Gareth O’Neill took charge of the National Road Series leader’s jersey and he spoke of his delight at the finish.

“This circuit, I’ve done it a lot of times now, and it is very, very hard. There is a hard surface and then we had the weather too. We had everything today. First few laps, with the rain, meant that there were attacks going left, right and centre but they always came back. The decisive move went with about three laps to go. I had virtual yellow on the road and Curley came across – he deserves it, he’s a great winner.  I am happy with third on the stage – it was a great weekend and race,” he said.

Organiser Liam Collins hailed the event and said that he was delighted to see the riders enjoying the hard racing.

“It has been a big success, it went well. There has been fantastic aggressive racing all weekend and proof of that is how the yellow jersey was decided in the last kilometres of the last stage. There have been worthy top class winners in all of the categories. This is the first stage race here and you couldn’t have scripted a better outcome. I just want to thank Cycling Ireland, the gardaí, our sponsors and the local community for all their help and support,” he said.

The Junior race was won by Dean Harvey who took the yellow jersey after a controlling four days of riding.