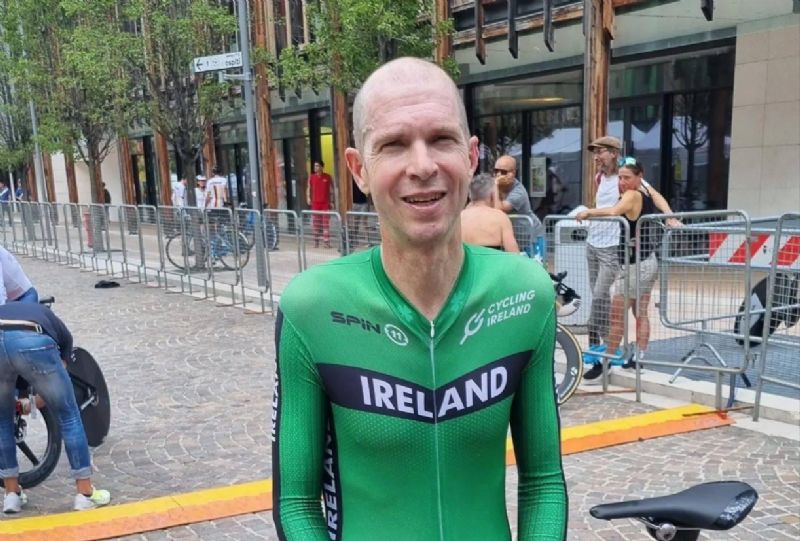 Greg Swinand is among the best veteran cyclists in the world, winning an impressive four masters time trial world championships after turning 50-years-old.

The American-born rider moved to Ireland in his early 30’s, and now 55, was crowned M55 World Champion in the time trial at Trento, Italy in September.

Despite competing in the masters grades for 15 years, Swinand’s performances have gone from strength to strength as he was crowned 2022 M50 Irish National TT Champion and continues to take home major honours in the green of Ireland.

“What really gives me satisfaction is all the people that I've met over the past 25 years who are doing stuff for Irish cycling. To win in an Ireland jersey is a way of paying them back to some extent. “

Swinand has been racing consistently since he was 12 years old and was among the top 30 juniors in the USA before enjoying a successful career as a regional rider across the Atlantic.

But when he and his family moved to Wicklow in his early 30’s, Swinand describes the move as a ‘rebirth’ in cycling as he adapted to the new racing scene and continued his career.

And he notes that ‘hunger’ can be the difference between success and failure as a veteran cyclist as having ‘something to prove’ has helped him stay motivated in training. He said:

“I think one of the things about success in the Masters is that you had to have been good enough to be pretty good. But if you're as good as a Nicolas Roche or somebody like that, you might get sort of fed up with racing and the sacrifices.”

“You sort of kick back (after retirement) and you're on the cruise train and the hunger is gone. So, I think part of the reason I'm good at the Masters is that as a young guy I always had something to prove. If you don't have the hunger you're not going to train as hard as you have got to - it's not a cake walk.”

And training as a veteran, Swinand looks back at times that overtraining impeded his progress, while in the earlier days of his career modern equipment such as power meters would have been of benefit to target certain power zones. He said:

“I didn't realise it, but I was probably making training mistakes. Fundamentally, it was that I was just training too hard. When you think you're training aerobically but you're just going over because you don't know. There are heart rate monitors, but your heart rate is just so up and down.”

When it comes to training as a veteran, there is no easy blueprint in Swinand’s opinion - what works for some may not work for others – but as a time trialist the decline is a little more forgiving.

In fact, the Dan Morrissey-Pactimo rider smashed the Irish hour record on track at a staggering 50-years-old back in November 2017 – putting 1.6km into his previous record the year before with a distance of 48.469km.

And the fundamental piece of advice from Swinand is not to get caught up over the numbers and power you could previously produce, but rather adjust them to fit your current capabilities. He said:

“This is not proven, but it's a perceived wisdom. Your aerobic (fitness) degrades less than your anaerobic and Vo2 Max type power. Anecdotally, you get less worse - or slower-slower as I like to say - at the time trial. I would say focus on aerobic training.”

“It's very hard to say how to extend your career, there's an alternative theory that you need to train more intensively when you're older. I didn't do anything different until I was about 50. People say 50 is like hitting a wall - it definitely all of a sudden was not going as well as I'd hoped or thought I was going to go.”

“You ask what to do (when you're training in your 50's) and it's really just that you've got to interpret the watts down. You just can't hold onto that dream of holding the watts that you used to hold - you've got to go with what you got.”