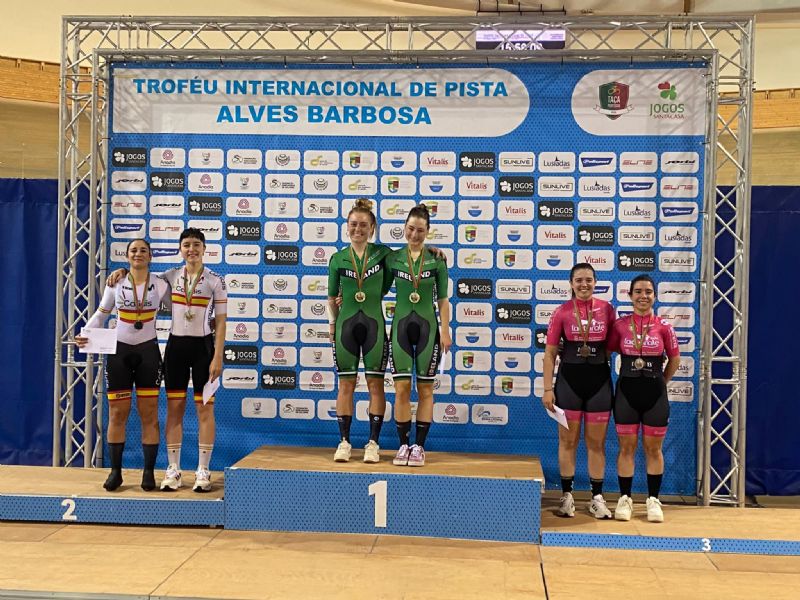 It was a busy weekend for Irish cyclists on the track as riders competed in events in Portugal, Switzerland and Australia.

After completing a recent training camp in Majorca, Lara Gillespie, Mia Griffin and JB Murphy competed in the national team colours at the Trofeu Internacional De Pista in Anadia, Portugal with the José Bento Pessoa on Saturday, December 17th, and the Alves Barbosa on Sunday, December 18th.

Both events carried Class 2 ranking points and culminated with Griffin and Gillespie taking home a dominant gold in the women’s madison on Sunday.

The women’s omnium events saw Gillespie bounce back from a Saturday crash to come out on top in Sunday’s race, with Griffin taking sixth and fifth place finishes on Saturday and Sunday respectively.

In his first track outing in five months after an injury layoff, Murphy put in a strong performance to take the silver medal in the men’s Omnium on Sunday after an 8th place finish on Saturday.

Caulfield Dreier and Donald also teamed up for the Madison races with 7th and 9th place finishes.

Orla Walsh (NoPinz) impressed as she took her first-ever podium placing at a UCI Class 1 event at Grenchen, Switzerland, on Saturday. She finished third in the sprint event to earn a bronze medal. A 13th place finish in the keirin rounded off her weekend of racing.

Andre Grennell (Spellman Dublin Port) competed in the men’s endurance races in Grenchen with 20th place in the elimination and 21st in the Points race.

Conor Rowley (Blackburn Cycling Club) also competed in the Austral Wheel Race in Melbourne, Australia. He finished 4th place in the keirin and 8th in the sprint events over the weekend.

“It was great to see so many Irish riders in track action over the weekend. Podium performances from regular National Team riders was a big confidence boost with Olympic Qualification due to begin very shortly.”

“I was also really encouraged to see so many other Irish riders continue to make the commitment to race internationally, with the aim of gaining experience towards challenging for National Team selection. I would encourage anyone thinking of attending races on the international calendar to get in touch and we’ll do our best to help where we can, even if only to offer advice and answer any questions you may have.”