Ward and Rafferty dominant in Junior and U23 Road Races

Rafferty finished 24th in the bunch sprint for bronze

The Road Races got off to an explosive start with the Junior Men this morning at the World Road Championships in Flanders, Belgium.

Team Ireland’s Darren Rafferty put in a brilliant performance to finish 24th in the bunch sprint for 3rd place.

The World Title was won by Per Strand Hagenes who made history today becoming the first Norwegian to become Junior Road Race World Champion. Romain Gregoire of France claimed the silver medal 19 seconds down on Hagenes. In the bunch sprint for bronze, Madis Mihkels of Estonia was victorious.

Ronan O’Connor was the only other rider from Team Ireland that finished the challenging course placing 66th, 2:52 down. Conal Scully and Dean Harvey were among the high number of non-finishers on the day.

Speaking after the race, Rafferty said:

“Just finished today totally empty so happy to have got everything out. The course was great, pretty much had everything and it was flat out right from the start to finish. I got caught behind a few crashes in the early laps but apart from that all went well. Overall a solid result and didn't have the legs to do any better so can't complain!” 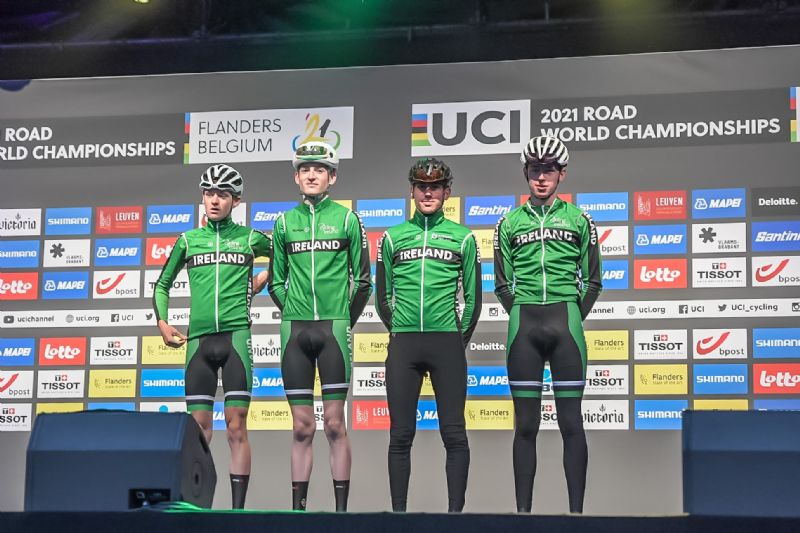 The second and final race of the day saw the U23 Men battle over 160.90 kilometres in what was a chaotic race from start to finish. After a delay in the neutralised zone due to crashes, the race wasn’t long kicking off and a three-man breakaway formed which included Team Ireland’s Adam Ward. Ward put in a spectacular performance which saw him stay in the breakaway until he eventually lost time on the 10th hill of the day and was reeled in by the bunch with about 60 kilometres to go.

After the race Adam Ward commented:

“The first couple of k [kilometres] were just so hectic, in the neutral zone there was like three crashes and then I was at the front when the break was going and I thought I may as well take a hack.”

After a long and testing race, Dillon Corkery was the first of the Irish Team to finish, crossing the line in 86th position. Ben Healy who competed in the Time Trial at the beginning of the week also represented Ireland (100th). After a spending a massive amount of time in the breakaway group, Adam Ward rolled in at 113th.

Italy claimed another World Title of the competition with rider Filippo Baroncini. In the sprint for silver, Biniam Girmay of Eritrea got the better of the group finishing ahead of Olav Kooij from the Netherlands. Girmay claimed the first ever medal for Eritrea at a UCI Road World Championships.