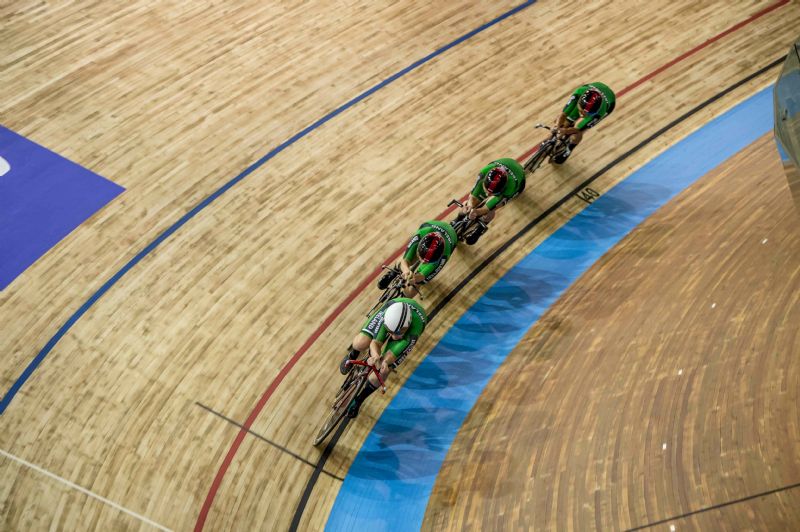 Ireland’s Women’s Team Pursuit squad of Emily Kay, Kelly Murphy, Mia Griffin and Alice Sharpe finished 5th at the UCI Track Cycling World Championships on Thursday in a new National Record of 4:21.126. The result is Ireland’s best finish in the event at World Championship level and continues an upward trajectory for the Ireland’s track cycling program. Ireland had their most successful Track Cycling European Championships in early October winning bronze in the Women’s Team Pursuit and bronze in the Men’s Scratch race when JB Murphy powered home.

The Women’s Team Pursuit quartet narrowly missed out on the bronze medal ride-off but were pleased with their record setting performance at the biggest event of the year. Established track cycling nation, Canada recorded the fourth fastest time in the first round completing the 4,000-meter team pursuit in a time of 4:20.191. The result saw Canada progress to the bronze medal ride off against Great Britain with Ireland missing out.

Germany went on to win Gold ahead of Italy in the Silver medal position and Great Britain winning Bronze.

“On a review of the race I think the main thing we can take from Worlds [Championships] and on the back of the Euros [Championships] is the fact that we’ve been really consistent, and I think that consistency is a good place to start from. If we keep chipping away, we are going faster and faster marginally each time, I think there will be eventually a time where we will go a lot faster. So that’s what we’re hoping and that’s what we strive to do and with this I suppose we’ve not had [teammate] Lara [Gillespie] for the past two competitions and what we’ve learned now is we have a good five girl squad who can each race at that level. We need five girls to be part of this so I think that has been something that we’ve taken from these competitions.”

Ireland’s Team Pursuit Squad has an eye on the future and qualification for Paris 2024. Mia Griffin added:

“We’re just excited to chip away at the time that we’ve done now, and I think we will work hard over the winter to keep chipping down on that time and try bridge the gap to the bigger nations. Where we are now, I think we’re in a good place at the moment for going forward because we’re fifth in the World ranking, so I think going forward for this Paris cycle it’s a good place to be. In the last cycle we weren’t anywhere near that at this stage so to be where we are in a comfortable position right now is very important, I think and this winter we’re ready to work really hard."

“Other than that, I would like to thank Cycling Ireland for giving us these opportunities because we’ve really, really appreciated them and just the support from the staff and the support from Spin 11 as well with the clothes and all the stuff they’ve given us. It’s been a good consistent two competitions for us and I think we can start from there and work towards going faster and we also miss Lara [Gillespie] so we wanted to add that in as well that she’s part of our team too and we’ll have her back as soon as possible.”

“The team rode excellently to deliver another National record in the World Championships here in Roubaix. Consolidating their excellent performance in the recent European championships. Managing the Championship environment has been an important learning as well as being present to confirm the gap to the best in the World this year. The squad are motivated, committed and energised to continue striving for more and are grateful to Cycling Ireland and all its partners for the support that allows them to achieve their goals. Watch this space!!”

The Irish riders are back in action on Saturday. Emily Kay and Alice Sharpe will team up for the Women’s Madison at 10:04am Irish time while Kelly Murphy and Mia Griffin will ride the Individual Pursuit at 12:25pm.

Watch the action live on Eurosport