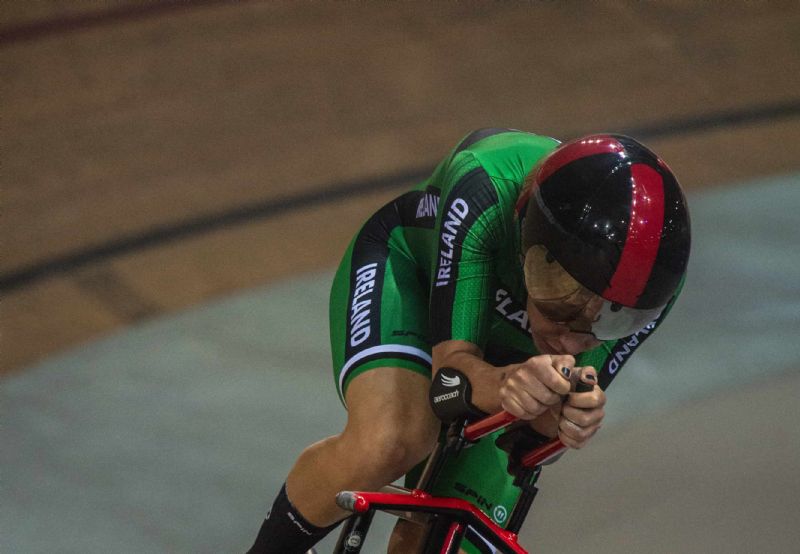 Murphy finished 7th in the Individual Pursuit Qualifying with the impressive time while Orla Walsh raced in the Women’s 500m TT Qualifying and the duo of Mia Griffin and Alice contested the Women’s Madison Final.

Walsh was up first in the Women’s 500m TT Qualifying and set a time of 34.765 seconds, finishing in 21st place but missing out on qualification for the final.

Kelly Murphy was next on track as she contested the Women’s Individual Pursuit Qualifications aiming to improve on her 6th place finish at the European Championships in August.

And Murphy set a new National Record of 3.25.424 (subject to ratification) as she finished 7th in a strong field – putting almost a full second into her own previous record of 3.26.362 set at the European Championships this year.

“I’m satisfied with that ride. When I started out track racing 3.25 was a really competitive time and I knew that I had the numbers on the road to compete with that. Now the game has changed, and everyone is getting faster and faster.”

“It’s a solid time and a solid outing on the day that everyone wants to do a good time, so I’m satisfied to be competitive now and to start chipping away at other things.”

“I’m delighted (with the 7th place), because you can use the Team Pursuit as a proxy before you get up to the Individual Pursuit. There were some fast girls there today so just to be in the top half I thought I’d be satisfied; I don’t think I can ask for more than 7th so that’s a solid outing.”

Griffin was involved in a small crash just over ten laps after the start as Ireland fought to hang on to the leading group for much of the race.

“It was a pretty ferocious pace, and it wasn’t helped by when I think the lights broke and they neutralized the race. Everyone was still going full gas and during that time Mia got caught up in a crash, so we were just on the backfoot after that – not an ideal start to the race.”

“The Madison always leaves you feeling a bit like that (unfinished business). It’s one of those races that even if you do well in it there’s always areas to improve in. We definitely are hungry to improve on this performance.”

“We spent a lot of the race just chasing and trying to get back in contention and up there. It was a really brutal race but we gave it everything that we had. We have a lot to do, learn and experience to gain in this event. I think by doing a lot of smaller events and building up that we can really improve.”

Saturday’s action is Ireland’s last at this year’s World Championships after four days of competition at the Saint-Quentine-en-Yvelines velodrome as the focus now switches to 2023 and upcoming qualifying opportunities for the Paris Olympic Games.