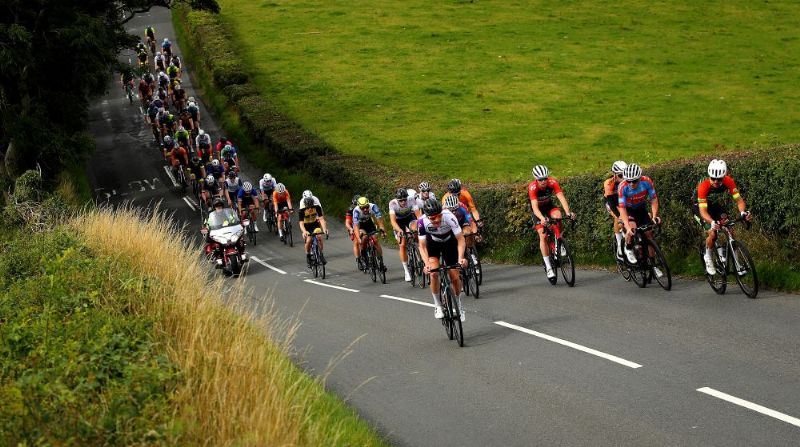 The picturesque rolling hills of County Down played host to the country’s elite cyclists as the latest edition of the National Road Series 2021 took place today.

In bright sunshine and warm temperatures, the elite men and women took on Round Three of their league competition. While the junior men and women competed in Round Two of their respective contests.

Banbridge Cycling Club took the riders to a challenging and hilly 30-kilometre loop close to the town of Dromore for the annual John Beggs Memorial.

With reduced fields the junior women joined with the seniors for their race and as did the junior men in the A1 and A2 fields. It meant for some challenging races as the mixed age categories drove on the action.

The women undertook two laps of the circuit, with multiple attacks going clear, but such is the competitive nature of the bunch that no one was able to make their advance stick until that final sprint up to the steep finish on Mount Street, Dromore.

A group of four riders broke loose on the short and steep climb to the finish. It included series leader Fiona Mangan of Greenmount in Limerick, as well as Caoimhe O’Brien and her sister, in the junior ranks, Aoife O’Brien.

What followed next, in a stunning display of road craft, was a blistering gallop to the line with Caoimhe taking the win ahead of Fiona and Aoife. Fiona Mangan retains the women’s National Road Series and Aoife takes hold of the Junior women’s leaders jersey for Round Two of the league. Caoimhe and Aoife have just returned from racing criteriums with Torelli Cycling Team in the UK – both were overjoyed with finishing together. Caoimhe said:

“I’m delighted to win today. I came second at the first series event in Limerick. It was a good race and a really, really strong field. Loads of attacks went but we chased them back and we knew it was going to be a bunch sprint. Fiona (Mangan) put in a really good dig with one kilometre to go and as we came onto the hill I jumped and gained on her. I jumped again with two hundred metres to go and I’m just delighted I got to put my hands in the air.”

“I’m delighted to take the lead in the Junior National Road Series. At the bottom of the hill it was very steep, but I just got on Caoimhe’s wheel and I knew she would have a good sprint at the end. I’m looking forward to defending it in the next round.”

While that was happening the Senior men and Juniors were battling out for the win. Again it was a case of attack, counter and chase with a break succeeding, where many failed, building a sizable lead with two laps to go. The hills played their part but, as has become a regular feature, Daire Feeley was leading the charge.

But late on a split appeared in the pack and four riders, including Matthew Teggart, went clear on that crippling ascent to the finish. He used all of his power in the sprint and he succeeded in riding clear, winning by about three bike lengths in a commanding display. He’s not the first Teggart to take the victory at the historic event and he spoke afterwards of what it meant to win. Matthew said:

“Pleased with that one, it being a local race as well, I’m the third generation of Teggart to win this race as my uncle David won it as well. It is a special one for the family. I was a bit nervous, which caused me to have bad legs at the start. It took a while for the break to go, two laps of the four. We worked well together and got a good gap, it grew to two and a half minutes so I knew it was going to come down to that. With about 20 kilometres to go, on one of the drags I had a good dig to see who would respond. They pulled us back, five or six kilometre later. “Everyone was cooked, all matches burned, and coming into the end I timed my sprint well and had good legs.”

Daire Feeley took hold of the National Road Series lead from Gareth O’Neill. Feeley spoke to Cycling Ireland about a race that saw him with a significant chase on the first lap following a mechanical. Daire said:

“I was touch and go, between mechanicals and a very hard circuit. It is all about keeping the head from start to finish. My seat post slipped on the first lap and I ended up chasing back on. Luckily I got back and they were still together, attacking each other, and that saved me. Not the result I wanted, I wanted to win it, but I’ll settle for six. The jersey is a nice thing to get, this series awards consistency. This jersey is a nice thing to have.”

In the Junior men’s in form Dean Harvey retained the leader’s jersey in their Round Two battle.

James Meehan, finished 13th, among the seniors, and took the victory for the Juniors race – with Harvey folloing behind in 23rd.