Seth Dunwoody was the fastest Irish finisher in the Boy’s Time Trial netting 5th place with a time of 11:06.81. The Orchard CC cyclist came within six seconds of a medal and was sitting in third place until the last few riders. Patrick Casey also made the top ten, finishing in 10th with 11:12.55, and Sam Coleman was 43rd with 11:39.20, having been unlucky with the conditions during his race.

Speaking after the race, Dunwoody said,

“I’m over the moon with that, it’s such a big competition with a lot of strong riders. The course started with a 90 degree corner off the startline with pave and cobbles. There was gradual incline before a 180 turn, and back into town which was a very fast run into the final. I think we take away from today that we are a country that can be reckoned with in the road race, and if we play our cards right, we have three solid riders that we can do the job with.”

Aine Doherty was the best of the Irish in the Girl’s Time Trial, finishing tenth with a time of 12:40.7 over the 8.4km race that went through the town centre. 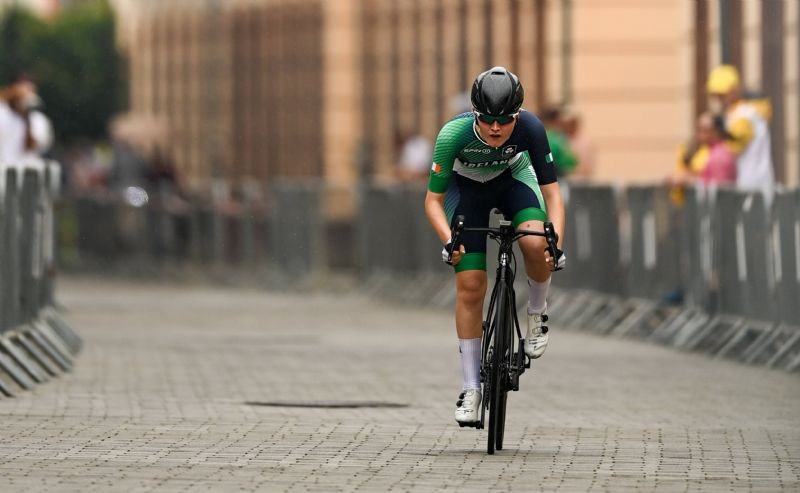 Speaking after the race, Doherty said,

“It feels amazing, I can’t believe it. Top ten was my goal so it feels amazing and to get it feels unreal. It’s really special, my parents are here as well, so hearing them on the sideline and to be able to get a good result, it feels really good. It was not an overly long circuit, you could pace it off the start, it was a bit of a drag up to the hairpin, so you just give it everything and pedal it back down. It was really nice in the square, all the tight corners and the atmosphere was class!”

The cycling teams are back in action again on Thursday, 28th July for the road races.