A crash in the final derailed Oisín O’Callaghan’s chance of retaining his Downhill Junior World Title at the weekend.

O’Callaghan was favourite going into this year’s final in Val di Sole having posted the fastest time in the qualification round.

In the final on Sunday, O’Callaghan was in the green for the three splits before his crash, ultimately finishing in 5th place. 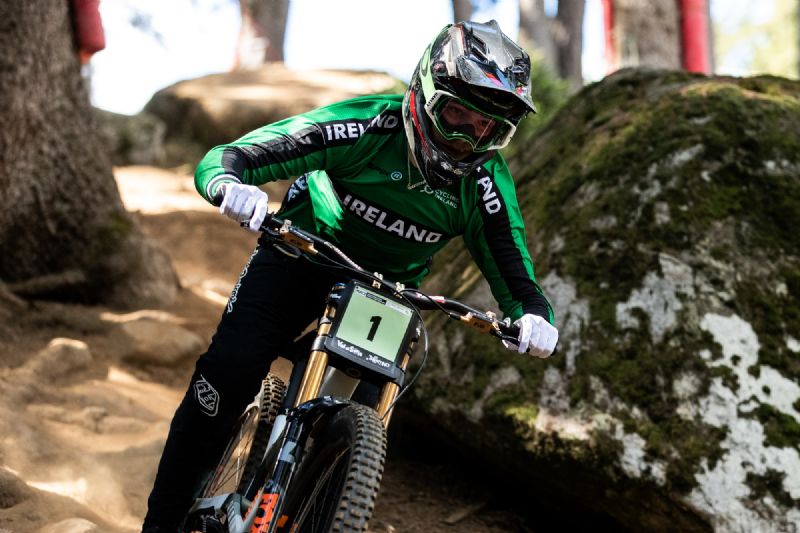 Speaking about how he felt over the weekend and the racing conditions heading into the final, O’Callaghan said:

“I was feeling good all weekend. I knew at this level I had to push and let it hang out. It rained Saturday night so the practice on Sunday morning was almost to see how the track was riding.”

As O’Callaghan left the wooded section of the course, a crash cost him valuable seconds but the Limerick rider never gave up.

“I was committed and knew I could win it so I was really riding how I wanted to and a damp spot caused the crash as you almost left the wooded section. I remember thinking f**k and scrambled to get the bike and keep fighting. I was coming into the finish and I could see I was in the green for the 3 splits and then red so I felt the anguish and let out a roar while still pedalling to the finish.

Despite his disappointment, O’Callaghan is confident in his speed and ability and is looking forward to the next round of the World Cup in Lenzerheide.

“It’s racing I know, but I was seriously disappointed. After a few hours reflection, I know my speed and ability is there again after some injuries and confidence was low after a concussion this summer. Onwards and upwards to Lenzerheide next weekend.”

O’Callaghan is grateful for the support he has received.

“Thanks to everyone for the continued support and here’s to Irish mountain biking going from strength to strength.”

The future of Irish mountain biking is bright.