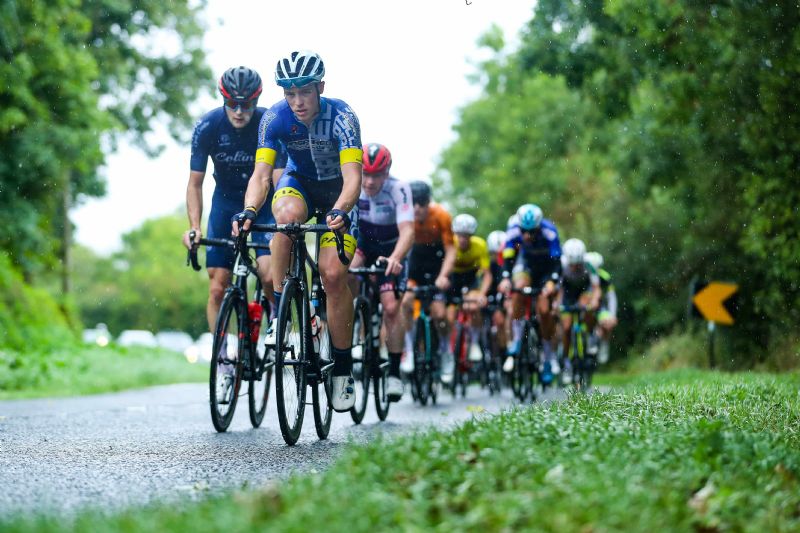 The women’s and men’s National Road Series 2021 has been decided on Carlow’s Killeshin Hills with Fiona Mangan and Daire Feeley taking the honours. On punishing wet rolling roads the most consistent riders of this year found themselves defending their positions of dominance as attacks and intense racing decided both races.

Fiona was first up in the women’s field as they rolled out from the start for their race. The field was small, with the World Championships and other events, taking their toll on the sign on sheet but it did little to disturb the intensity of the racing.

The early kilometres were set to cruise control as the nervous bunch watched closely and monitored each other but the fireworks started on the first of the challenging climbs as attacks went off the front.

There were repeated efforts to get clear and it was a three-up group of Caoimhe O’Brien, Lydia Boylan and Becky Woods who succeeded. It was Caoimhe who started the effort and glanced off the front followed by the two other strong women. It was a nail-biting finish as Fiona Mangan led a spirited defence of her jersey – tracking to within just a few seconds to catch the three escapees.

Caoimhe’s sprint had proven itself in Dromore for the Banbridge CC John Beggs Memorial and again her power and pace led to victory. She took the win with Lydia and Becky following behind in second and third. Fiona came across the line in the leaders jersey, taking the sprint for fourth just a few lengths behind.

Afterwards Caoimhe spoke of her joy at taking a back-to-back victory in the National Road Series.

“I am delighted. It was a good circuit and really suited me. There were three of us away. We got away on the climb and coming into the finish I was confident in my sprint. I saw Lydia go 100 or 150 metres to go and I just jumped on and my legs got it for me. I wasn’t really sure about how today would go. I knew it was going to split on the climb – we were on the main road for a good bit and when we came onto the circuit proper then we were on draggy roads. Once when we got to the last section of it I just put in a dig on the climb, Lydia and Becky came with me. We pushed on more on the downhill and I knew with about 2kms to go that the road was kind of too flat to get away. I knew it would come down to a sprint and I was confident in my sprint. I pushed at the end and got the win. My season has been good. I was at the Europeans two weeks ago in Italy – my form is good, hopefully I’ll have the legs at nationals.”

For Fiona Mangan it was the realisation of a year-long effort to take the leadership of the series.

“I am so happy to take the jersey. Today was a great race. It was a bit slow at the start but once the hills came the girls just kept attacking which was brilliant. It definitely put us to the test. I am really happy, coming off Rás na mBan it was really good to get a bit of racing before the National Championships next week. I am just so happy to keep the jersey and a great way to finish off the season. I just want to say a big thank you to all the organisers, especially Cycling Ireland for putting together the National Road Series. I know how much work goes into it from the club at home,” Fiona said.

The National Road Series 2021 Fiona Mangan finished with 197 points, Becky Wood was second with 170 points, Caoimhe O’Brien was third with 155 points, and Darcey Harkness had 116 in fourth. 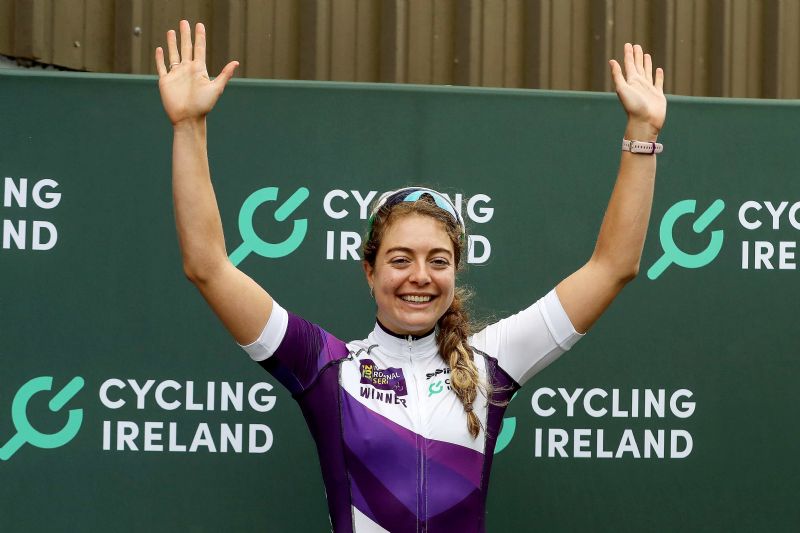 The senior men’s field faced a classic 133km over the Des Hanlon Memorial course in the hills of Killeshin. This was one of those days for riders capable of dealing with heavy roads and rolling terrain.

One of those men was Chris McGlinchey and it was he who set the pace for the day. Breaking away with two other riders with 100kms to go and finding himself alone for the remaining 70kms.

The fact that McGlinchey could not overhaul Daire Feeley meant that some of the stress of the event was off for the leader in the series. But that did little to slow the pace and McGlinchey found himself in the lonely position of solo leader having dropped his companions on the climb.

It was a dominant display and harbinger certainly for what might happen at next week’s National Championships in Wicklow. He found hard to keep the pack at arms length and finished well clear of the field, exhausted but clearly happy as he through his hands in the arm in triumph.

“It was a long day, myself, Mark Dowling and a guy from UCD went on the climb just before the lap. We had 100km to go Dowling and the other guy were struggling a bit and I attacked them with 70km to go - 70 lonely kilometres for me. I just dug deep. It was a tail wind up most of the climb, I just buried it on the ascent and recovered on the descents. I am really happy to take the win in the Des Hanlon – it is such a prestigious race. It is one of the most important races of the year so I’m just delighted to take it and it being so close to the nationals, is a good sign. Feeley and some of the other guys were on my tail but it was very tough to dig deep in the last ten and I am delighted to have pulled it off.”

Daire Feeley spoke of his joy at taking the win in the National Road Series, finishing in second place in a sprint at the line.

“From the gun it was very, very hard. There were a lot of lads who were looking to take the lead in the National Road Series. I tried to ride the standard race I normally would, which is just ride from the gun and wear a lot of lads down but that didn’t work. I was marked out of it from the start so I really had to work or it. Luckily it was Chris McGlinchey up the road, he had missed a number of the races in the series so that gave me an advantage and I didn’t have to ride to bring him back. Chris deserves the win today, he’s an animal. I came here to win the National Road Series, I have done that and I am happy with it,” he said.

Daire spoke of the importance of consistency in pursuit of the National Road Series.

“My teammate Richie Maes said to me in Newcastlewest, I was only twelfth and I nearly threw the head but he said to me that you can win the national series if you stay consistent. And that’s what happened, I picked up a bit of form through-out the year and I came here today with good legs. This league awards consistency and luckily, I had that. After today I got a good bit of conditioning for next Sunday at the National Championships and hopefully we can do some sort of a result. It is difficult, we’ll have our work cut out for us with the big boys over for it but we’ll play it cute and see what happens,” the champion said.

The senior A1/A2 National Road Series finished up with Daire Feeley on 170 points, with Chris McGlinchey on 134, third was Luke Smith on 124 points and Liam Curley on 122 points. 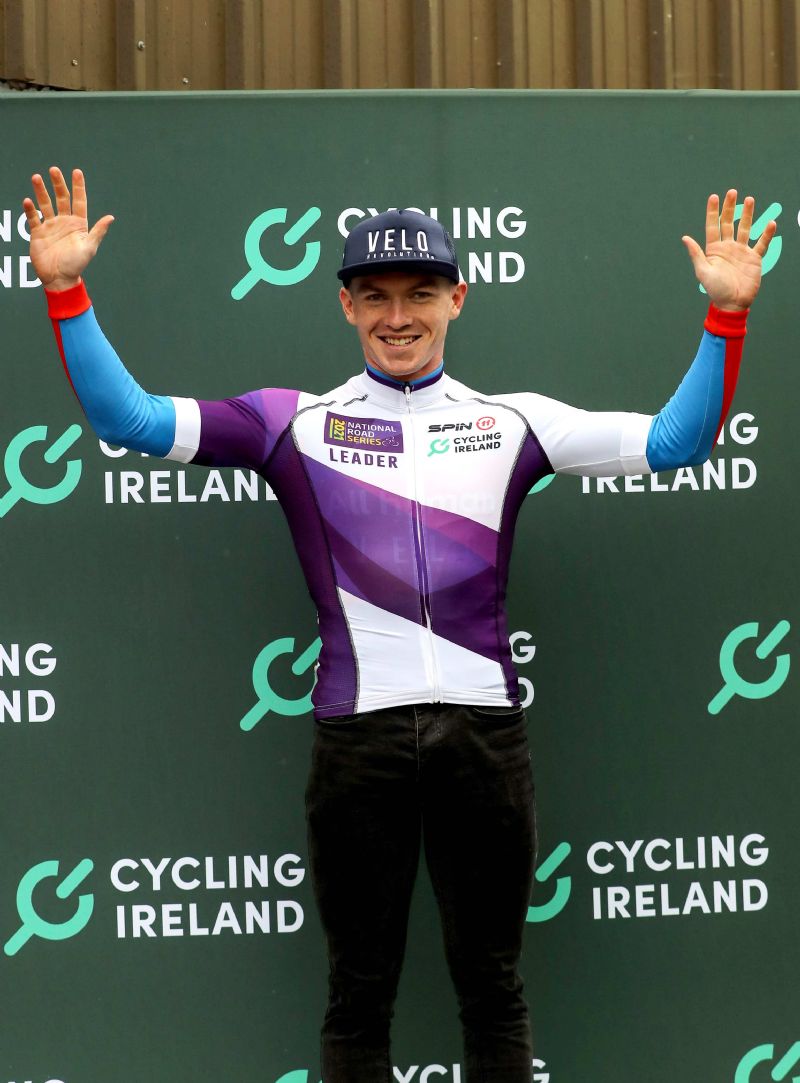