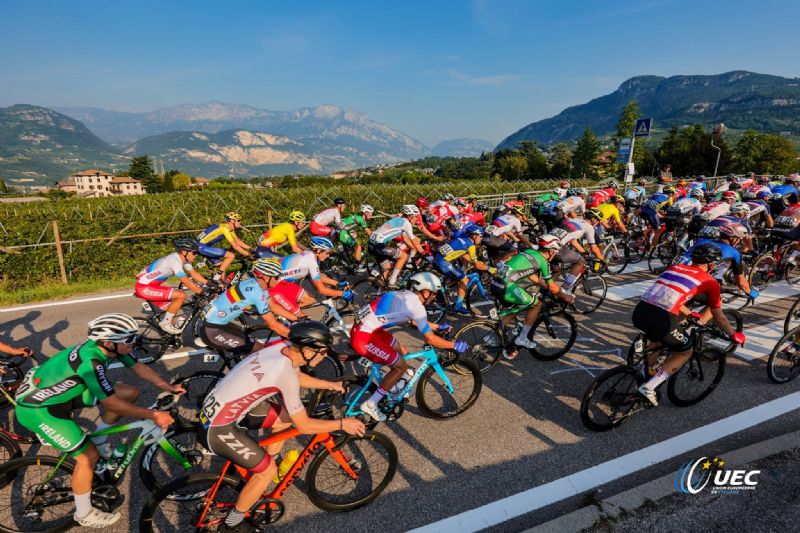 Just under 150 riders in the U23 Men’s category rolled out of Piazza Duomo in Trento this morning to start their 10 laps of the testing 13.2 kilometre circuit. A circuit that proved challenging for riders yesterday, similarly tested the U23 Men and Elite Women today.

The gruelling 133.3 kilometre race came to a close with 67 out of the starting 148 riders making it across the finish line. Among the group of finishers was Ireland’s Dillion Corkery coming home in a group of six, 1:31 down placing 29th. Teammate Adam Ward, finished in the largest group of riders, six minutes down, putting him in 53rd position.

Commenting on the race, Corkery said:

It has been a positive experience overall for Corkery and for all of Team Ireland, one which they can learn from and build on.

“It’s nice to know that I’m at the level I suppose, you know so I can take a positive from what it’s been.” Corkery added.

Megan Armitage and Ellen McDermott represented Ireland in the Elite Women’s Road Race this afternoon. The savage heat added to the already challenging circuit which saw just 32 of the 102 starters finish the 107.2 kilometre race. Armitage and McDermott were among the high number of riders who battled hard but were forced to withdraw when they lost contact with the bunch.

Ellen Van Dijk of the Netherlands took gold after she broke away from the group. Liane Lippert (Germany) claimed silver ahead of Rasa Leleivyte (Lituania) 1:18 down.

All eyes will now turn to the Elite Men’s Road Race tomorrow, Sunday 12th. Sam Bennett, Ryan Mullen, Conn McDunphy and Matt Teggart will fly the flag for Ireland in the final day of the European Road Championships.

Starting at 11:30am, the Elite Men will take on an opening 73km loop in the Valle dei Laghi which leads back to Piazza Duomo in Trento where the riders will complete 8 laps of the 13.2 kilometre circuit.