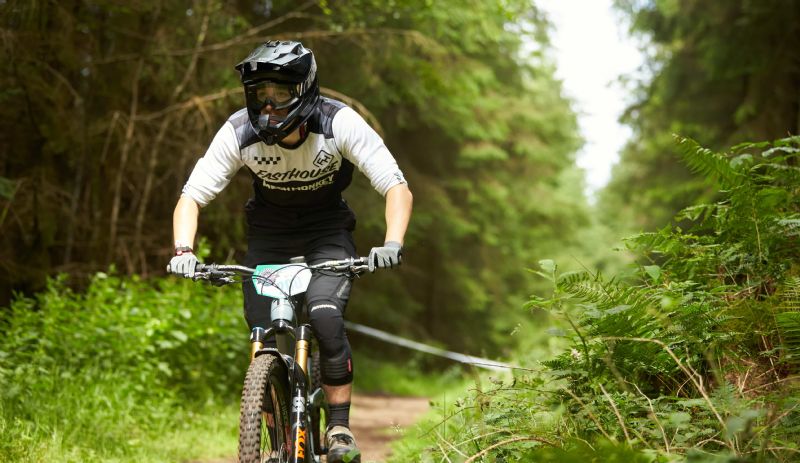 The 2022 Enduro National Championships took place in Ravensdale, Co. Louth over the weekend of the 16th and 17th July, with 250 riders competing in various categories.

Hosted by the Vitus First Tracks team, the five-stage event presented all those racing with dry, dusty trails on the hottest weekend of the year so far.

The Saturday consisted of practice runs for all competitors, allowing everyone to focus on different sections and dial in their lines ahead of Sunday’s racing.

With the coveted Irish National Champion jerseys up for grabs, the riders left it all out on the tracks, overcoming the searing heat to lay down some rapid times on the rock-strewn course.

In the Pro Men category Greg Callahan took the title from Kelan Grant by just 1.8 seconds after some incredibly close racing, with Gary Donaldson securing the bronze medal on the national podium.

The Women 14+ category saw Leah Maunsell win her eighth consecutive National title in commanding style, with Maeve Baxter in second, and young Hannah Mullin demonstrating her intent for the future in third.

Callum Morris took the title for the Junior men, displaying more of his fine seasons’ form, whilst Ruairi Steele was second, and Darragh Ryan third.

The highly competitive Under 21 Men category saw Ben Wilson win the National title ahead of Brendon Conroy by just under 5 seconds, with Shane O’Sullivan in the bronze medal position.

Philip Mullan was delighted with his win in the Master Men (30-39), with James Macferran in second and Jason Murphy in third. Glyn O’Brien added to his achievements for the weekend by taking the Veteran Men (40-49) title as well as organising the event in Ravensdale. Conor Campbell raced to second place and Michael Cowan third.

In the Super Vet Men (50+) Brendan Masterson was ecstatic with his Nationals victory, Joe Ward came home in second and Stanley Callaghan adding to the family haul for the day with his bronze.

For the full results and details of the non-National title race results, please see: http://www.offroadcyclingireland.ie/wordpress/wp-content/uploads/2022/07/Enduro_National_Championships_2022_Results.htm